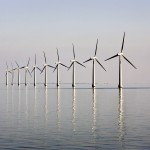 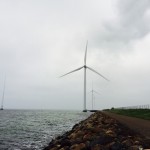 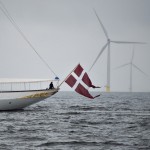 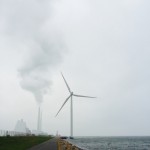 One of the turbines at the DONG Energy Avedore Holm test facility, with a coal power plant that is converting to biomass energy in the background.

Standing on the shore of the Baltic sea a few miles outside of Copenhagen, Denmark, the view’s about what you’d expect. Rocky shore, grey horizon, a boat here or there. But this shore is special. Look up, and you’ll see — and hear — three giant offshore wind turbines cutting through the air. Each stands 500 feet tall, with three blades (each close to 200 feet long), spinning non-stop.

“The blades look quite thin, but don’t be cheated,” says Rune Birk Nielsen, with DONG Energy, which runs the turbines. “They each weigh about twenty tons. They are massive.” Each turbine has a capacity of 3.6 megawatts, or enough to power 3,000 Danish homes.

Nielsen guides me through the small offshore wind park — well, technically it’s offshore. The turbines aren’t actually too far from land — each is connected to the shore by a short footbridge about ten yards long.

“For us, it’s kind of a demonstration park,” Nielsen says, “where we are able to test all sorts of things.” With turbines close to shore, they’re easier to fiddle with or repair. The company can safely train their workers without sending them far out to sea, where most of the country’s offshore turbines are.

Denmark is booming when it comes to wind energy. To understand how and why, you have to go back a few decades.

The country’s energy transition away from fossil fuels and towards renewables wasn’t motivated so much by concerns over climate change or “being green.” It was something much more sudden: the oil shocks of the seventies.

At that time, over 90 percent of the Denmark’s oil was imported, and when the flow of oil was cut back, the nation suffered. The shocks served as a wake-up call to Denmark: they needed to become more energy independent.

“There was political interest in making sure we weren’t that dependent on fossil fuels,” says Birgitta Jacobsen, Deputy Director of the Danish Energy Agency. “And therefore wind – which was an abundant resource in Denmark – was interesting to look at.”

Denmark did more than just look. They heavily incentivized and subsidized wind and upgraded their grid to make it more wind-friendly. Today, more than a third of the country’s energy comes from wind and within a few years, they expect more than half of their energy will. It’s a stark turnaround from just a few decades ago.

“The government at that time wanted to shape the future,” says Peter Sehestedt, an advisor for the Danish Energy Agency. “They wanted to show the rest of the world what can be done.”

They started with turbines on land. But Denmark is a very small country, and some of the turbines met resistance from locals. So they went offshore.

When Denmark started building these turbines offshore in the early nineties, they encountered challenges. But they also found some advantages. Yes, it’s more expensive, and saltwater is corrosive. But the wind offshore is stronger, and more consistent. You can put in bigger turbines. And there’s plenty of room out at sea for a small country like Denmark, too.

“If we just used about one percent of our sea territory, we could produce all of the electricity needed for Denmark,” Sehestedt says. About a third of Denmark’s wind turbines are offshore, but that percentage is likely to grow. Worldwide, about 9 out of every ten turbines installed offshore are made in Denmark.

Denmark is also helped by the fact that they’re tied into the grids of neighboring countries, which can help ease issues with the intermittency of wind energy. If the wind dies down a bit, they can ramp up hydropower in Scandinavia, for instance, to make up for it.

So what would it take for Texas to follow Denmark’s lead? Well, it’s already well on the way. Texas has thousands of wind turbines, providing ten percent of the state’s energy every year. Everyone I talked to in Denmark was surprised to hear that Texas is sixth in the world for wind energy. “A substantial, non-trivial fraction of the world’s wind [energy] is in Texas,” says Michael Webber, Deputy Director of the Energy Institute at the University of Texas at Austin. That Lone Star wind boom was the product of several factors: generous federal and state incentives, strong political leadership and the right landscape: the state has plenty of flat, cheap land with good wind. (Most of the state’s turbines are in the Panhandle and West Texas, but there is a significant number onshore along the Gulf Coast.)

Right now, all of Texas’s turbines are on land, it’s simply cheaper that way. But one day, it may make sense to put some offshore, like they’ve done in Denmark. Texas has some of the best offshore wind potential in the world. You can get bigger turbines offshore, and they’d be closer to some of the state’s population centers like Houston.

“The other thing that people forget about is the offshore industry is basically headquartered in Houston,” Webber says. “We’ve got a lot of patents, and companies and service technologies and ships. The capabilities to do offshore oil and gas that we could also use for offshore wind.”

And the wind off the Gulf Coast still blows at the times when Texas most needs it – during hot, sunny summer afternoons as air conditioners go into overdrive.

“When we run out of spots for onshore wind [in Texas], we’ll move to offshore,” Webber says.

But turning to the Gulf for wind energy will likely take some time. A pilot project to install one test turbine there has faltered, and there don’t appear to be any other projects in the works.

Onshore at least, Texas remains a leader in wind, and that story continues: there are dozens of projects that came on line this year or in the works for next year.

This is the second in a three-part series on renewable energy and sustainability in Europe and its lessons for Texas. This series was made possible by a Energy & Climate Media Fellowship with the Heinrich Böll Foundation of North America.

Part One: What Spain Can Texas About Solar Energy

Part Three: Copenhagen Turns to Two Wheels and Takes Off