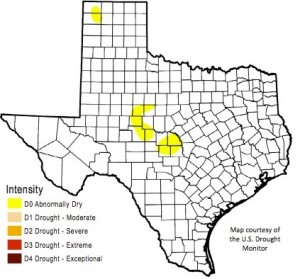 “Typically for Texas when we have an El Niño, we can expect to have a cooler, wetter winter. And so that bodes well for reservoirs that are still struggling in different parts of the state.”

He says that rain should be able to more efficiently run off into our rivers and lakes because our Texas turf is no longer parched.

Shadow of a drought

Despite Mace’s optimism about this year’s wetter winter, experts say that water conservation efforts put into place during the drought period shouldn’t be cast aside.

After droughts end, there’s a trend called the “drought shadow,” says Sheila Olmstead, an environmental economist at UT Austin. She says the idea is that people have learned so well to conserve that they keep doing it.

“So I don’t think it’s like you sort of snap your fingers, it begins to rain, and people’s behavior changes,” she says.

But in places with booming populations like Texas, the shadow can fade.

“That’s why we call it sort of a shadow, you still see that consumption coming back up maybe even to previous levels, because we’ve got all this growth going on too,” Olmstead says.

The message a lot of water planners are bringing in the wake of recent rains: Drought was a problem, but it was never the problem. If Texas is going to sustain its growth, experts say conservation measures enacted in the last few years should stick around. Sharlene Leurig of the nonprofit sustainability group Ceres says the state’s growth will demand conservation whether that comes in the form of conservation measures or high water rates.

“If we reverted back to the way we were using water in the past, we would have to invest in some extremely expensive water supply projects just to facilitate that historic high water usage,” she says.

And that’s assuming drought won’t return. Leurig points out that the historic Texas drought of the 1950s was interrupted briefly by major rainstorms, only to continue for a couple more years. When something like that happens it’s “so long drought shadow hello again, drought.”