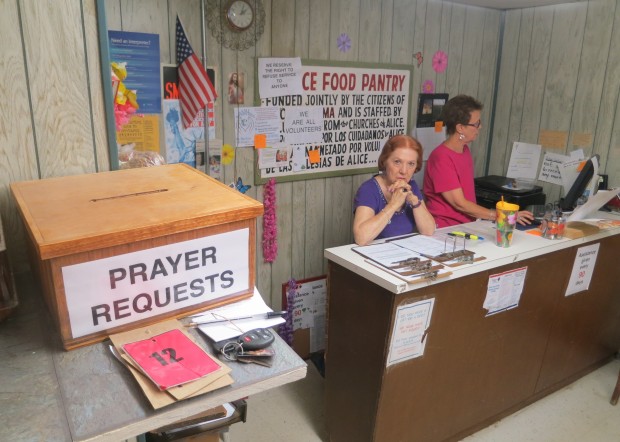 The Food Pantry is a busy charitable outfit off the old main street. Volunteers push creaky carts of canned goods, bread and tortillas from a small warehouse to cars waiting in the alley. Whitley says, lately, she’s been seeing a different kind of client come in for food.

“Men come in which is very unusual, usually the women come in,” says Whitley. A lot the men are unemployed oilfield workers.

A Life of Booms and Busts

Carlos Garcia is one of the first time visitors Whitley is talking about. He was raised with the ups and downs of the oil business. His dad worked as a roughneck. When the last big bust hit around ’83, his family was not spared. 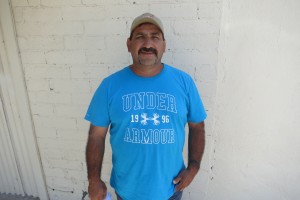 Carlos Garcia is an out-of-work roughneck. "Everybody's suffering" he says.

“We lost out,” says Garcia. “My dad lost his home he had just built, and I lived through it.”

Now he’s living through it again. Garcia followed in his dad’s footsteps. He did well for himself working on oil derricks until last year. When prices dropped he lost his job. He lost his truck, his phone got cut off. He thinks he’s going to lose his car.

“We always expect [the boom] goes for two, three, five years and it stops. But this time I feel it’s stopped for good,” says Garcia. “Right now…  I’m just putting everything in the Lord’s hands. Looking for a little work. My wife is working a part time job. It ain’t making the bill. They’re fixing to turn my lights off here.”

That’s why Garcia and his daughter stopped by the Food Pantry. He says he’s doing what he can to “pinch every penny we got. Just eat here and eat at my moms.”

But the need to save money is causing the pain of low oil prices to spread beyond the energy sector. Tanya Hinojosa has worked as a waitress in Alice for 15 years. She says she normally made between $65 to $100 a day in tips. Now, because people like Garcia are out of work and eating in, she’s sometimes clearing just 25 bucks. 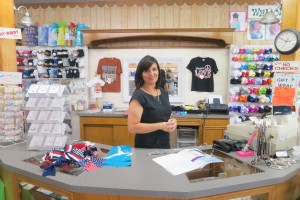 Lidia Escobar says business in her store has dropped off. "It's like a ghost town," she says.

“I have never ever made 25 dollars in a day. It was always more than that,” she says. That’s why she came to the food pantry for some help.

It was nearing triple digit heat on the day she was there, but she biked thereto save money on gasoline. Hinojosa has moved with her two kids back in with her mom. And she’s scrimping in other ways.

And that’s hurting business at Kid’s Korner clothing store down the street from the Pantry.

“It feels like a ghost town,” says Lidia Escobar, who runs the cash register. “On Saturdays here it’s even worse. You can tell People just don’t have jobs right now and the extra money to spend on stuff.”

Proprietors at a paint store and a car dealership said the same thing.  While some places have benefited from lower gasoline prices, the drop in economic activity is hurting city budgets in Texas oil towns. July receipts were down almost fifty percent from from the previous July in Alice. Cumulatively, sales tax collection in Alice is down 18 percent from this time last year, raising concern over how the town will complete costly projects its initiated during the boom. 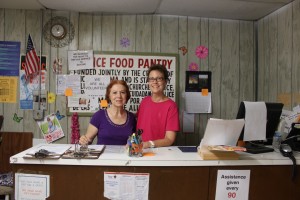 Penny Gordon and Bonnie Whitley work at the Food Pantry. Whitley says many people are traumatized by the sudden drop off in jobs.

So everyone keeps tabs on oil prices, hoping they rise again quickly. Back at the Food Pantry, Carlos Garcia –the unemployed roughneck- says it’s hard to believe how fast things seemed to fall apart. Faster even than they did in the 80s when his father lost his house.

“I mean it was going good, everybody was making money and everybody was spoiling themselves you know. And I can hear the cry all over town now. Everybody’s suffering,” he says.

He has a message for the young people of Alice: “Stick to school. Like I’ve always said, ‘we chose the industry, it didn’t choose us’ and we’re paying for it now.

Except, in a place like Alice, there don’t appear to be many other options.

“You’re talking about cheaper gas,” says Bonnie Whitley, the Food Pantry manager. “Everybody tends to celebrate that, except in Alice. Because if it’s cheaper gas then people are losing jobs”