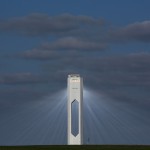 A tower at Abengoa solar plant at “Solucar” solar park 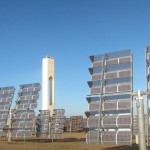 Photovoltaic solar panels (foreground) with the PS10 concentrated solar tower in the background at the Abengoa Solucar complex outside of Sevilla, Spain. 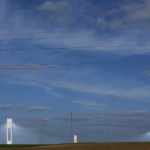 Towers at Abengoa solar plant at “Solucar” solar park are seen in Sanlucar la Mayor, near the Andalusian capital of Seville 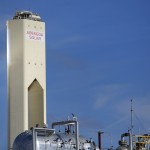 A view of the tower with the pressurized steam tank that allows for the production of solar energy after the sun goes down.

About an hour’s drive outside of Sevilla, Spain’s old city, past grazing black-footed pigs and olive orchards, sits the Abengoa Solucar complex, and it’s truly a sight: Imagine cresting a hill and then all of the sudden seeing several large towers, over 500 feet high, with hundreds of beams of light striking them — solar rays from an army of mirrors arrayed in a circle on the ground below. They’re called heliostats.

Once the solar radiation gets to the top of the tower, it’s used to heat up water. And it’s at this step that innovation turns to a technology that’s been around for well over a century: turbine technology. The solar radiation creates heat, that heats up water, which creates steam, which moves the tubines, which generates energy.

In the summer, there’s enough sun for 12, sometimes 13 hours of energy that can power up to 100,000 homes. And the towers can keep providing solar energy for several hours after the sun goes down, by heating and pressurizing steam for later. It’s not just here in Sevilla where solar has taken off. Spain is one of the largest producers of solar technology in the world. It’s second only to Germany for solar power generation in Europe. There are two reasons why Spain has become a solar king.

“One is they have a lot of solar resources. They have a lot of photons. It’s a sunny country,” says Michael Webber, Deputy Director of the Energy Institute at the University of Texas at Austin. “And the second is through a big policy push.”

“A lot of people would criticize them for that and say they went overboard. They pushed the subsidies too far, too fast,” says Webber.

Spain, in essence, took a gamble. For a while, Spain was the world leader when it came to solar energy, installing more and coming up with innovative ways to harness the sun. But in recent years that wave has crested.

“There are two sayings to keep in mind as a philosophy for life,” says Webber. “The first is, the early bird gets the worm. The other is the second mouse gets the cheese. The first mouse being slaughtered by the mouse trap.”

When it comes to solar, Webber says, Spain was the first mouse.

“There’s a penalty for being first to market. Because you buy the most expensive forms of solar. And you might pick the wrong technology,” Webber says.

And based on the current solar market, one could argue Spain picked the wrong technology. Prices for solar panels, which generate electricity directly from the sunlight, have plummeted, mostly thanks to unprecedented production in China.

But the price for Spain’s solar thermal technology that uses mirrors hasn’t fallen much. That’s why as Texas makes its own solar push, solar towers like the ones Spain aren’t likely to play a role. Instead, expect vast solar farms with photovoltaic panels stretching out across the state’s abundant, flat and cheap land. Webber says the state is also very unlikely to repeat the policies of heavy incentives and subsidies that Spain did.

“It actually bankrupted the country a little bit,” says Webber. “So they’ve dialed back on the subsidies.”

Texas has growing demand, Webber says, with more people moving here every day. And the peak of that demand — hot, sunny summer afternoons — is when solar could really shine.

“So the conditions are right for solar in Texas,” he says. “I expect Texas to be the next big solar market in the world.”

Right now, Texas is barely in top ten in the nation for solar, but Webber predicts the state will be number one “in a handful of years.”

It’s getting easier to see how that prediction could come true. While many Texans rooftops will look the same, energy companies are likely to move forward with large-scale solar farms, Webber says. This summer, Austin Energy signed a record deal for solar. The deal guarantees clean power from the sun at a prices cheaper than fossil fuels.

This is the first in a three-part series on renewable energy and sustainability in Europe and its lessons for Texas. This series was made possible by a Energy & Climate Media Fellowship with the Heinrich Böll Foundation of North America.

Part Three: Copenhagen Turns to Two Wheels and Takes Off