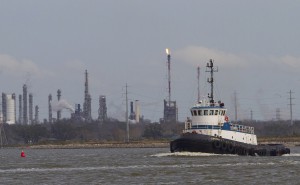 OPEC will reduce oil production by five percent a month until the Israelis withdraw from occupied territories.

Within days the war is over, but the impact of the “oil shock” remains. Prices skyrocket, and U.S. vulnerability is revealed.

A couple years later, the U.S. Department of Energy sums it up in a documentary called “When the Circuit Breaks: America’s Energy Crisis.”

“Unless we conserve while we look for new energy sources, we face the recurring threat of embargoes, of energy sources breaking without warning,” says the film’s dramatic voiceover.

The export ban was a key part of that “conservation.” The idea was to make sure the oil that was produced here, stayed here. But a lot has changed. In fact, there are hints of that change buried in that same old film.

“Oil shale — oil-filled rock — is being mined and processed in an experimental plant,” the film said. “Though it’s now expensive to get crude oil out of the rock, it could someday answer a good portion of our oil needs.”

Thanks to hydraulic fracturing, or fracking, and horizontal drilling, that’s exactly what happened.

So here we are.  People who want to lift the ban say exporting shale oil will be good for business – especially in oil-rich states like Texas. They also think it will help the country strategically.  Opponents say it could hurt the economy and the environment.

Over it all floats another big question: just how competitive would US oil be on the international market? OPEC still controls the price, and many OPEC countries can produce oil more cheaply than the U.S.

You’re sure to hear more from all sides in the days ahead. Congress could vote on lifting the export ban before the end of the month.