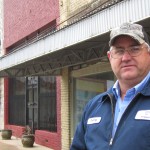 Larry Burns is the Emergency Coordinator for the town of Timpson, in East Texas. “If the quakes get much over a 5.0 [on the Richter scale], then we suspect we’ll have some damage. It could be anything from broken lines, broken mains to a water tower on the ground.” 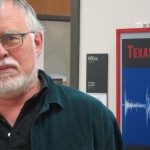 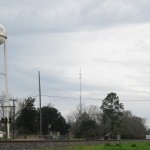 The water tower in Timpson wasn’t build to withstand earthquakes. “After 4.0 [on the Richter scale], we get pretty nervous,” says Debra Smith, the mayor. “We have buildings in town that are over a hundred years old.” 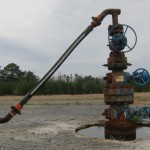 One of the disposal wells outside of Timpson. Oil and gas drilling wastewater is sent into this well that goes nearly two miles underground. 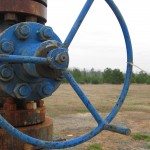 Disposal wells like this one are the point where a small operation could turn out to be causing big tremors that can be felt miles away. 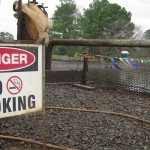 The Gator Services disposal well outside of Timpson in East Texas. 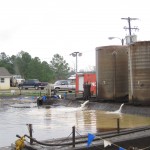 On a busy day, several tanker trucks will pull up and unload wastewater from fracking and drilling.

The North Texas towns of Reno and Azle have seen over thirty earthquakes since November, sometimes more than one a day. It’s been unsettling for residents like Barbara Brown.

“Damage to my home, sinkholes on my property. Nerves! And a lot of angst,” she said. “Because you just don’t know when they’re going to happen again.”

And it’s not the only town in the state that’s been hit with tremors. Texas has seen the number of recorded earthquakes increase tenfold since the drilling boom began several years ago. While studies have linked the quakes to oil and gas drilling activities, but state regulators and politicians say the science is far from settled.

So what does the science really say? Take a listen to the radio story: