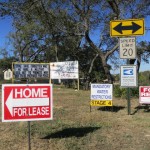 ‘For Rent’ and ‘For Sale’ signs are a common sight Spicewood Beach. The community had been without its own source of water since January 2012. 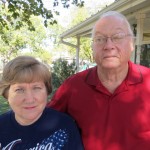 Wanda and Jim Watson retired to Spicewood Beach. They worry what lower lake levels will mean for the community’s future. 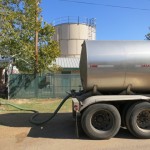 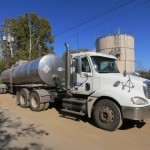 Now residents worry what will happen if the Agency sends water to rice farmers downstream, further lowering the lake levels. 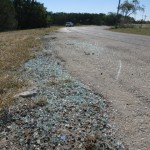 One of the LCRA’s tanker trucks got into an accident recently on the road into town. 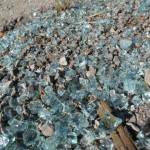 Glass is still visible from the accident. 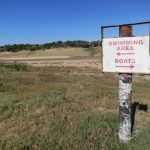 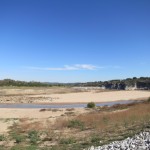 Low reservoir levels, like here at the North end of Lake Travis, have some advocating for storing more water underground, where it won’t evaporate. 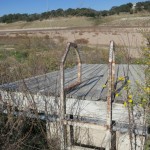 Lake levels are related to the levels of the water table in the area. If the lake goes down, more wells could go dry. 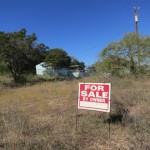 ‘For Rent’ and ‘For Sale’ signs are a common sight Spicewood Beach. The community had been without its own source of water since January 2012.

The first indication that things are still not right in Spicewood Beach comes as you reach town. You’re greeted with a welcome sign and a notice that stage four water restrictions remain in effect.  It’s been nearly a year since the small Highland Lakes community earned the distinction of being the first town in Texas to run dry during the great drought. The situation remains much the same. In some ways it’s gotten worse.

For one thing, there are a lot more ‘For Sale’ signs in front of a lot more houses.

“There’s vacancies all through here and unbelievably low prices, but there’s not takers. Who wants a house with no water?” asks Jim Watson, sitting next to his wife Wanda in their two story home.

The Watsons are like a lot of people in Spicewood Beach. When they retired, they put their savings into land and a home next to the lake. But the lake also serves as a reservoir for those downstream, including Austin and agricultural interests. The drought ravaged lake levels in 2011. Then more water drained out when the Lower Colorado River Authority [LCRA], the agency that controls the Lakes -and owns the Spicewood Beach water system- sent more water downstream to rice farmers.

Sitting in their living room the Watsons said that ever since lake levels dropped and the well failed, they’ve watched trees die, people move away, and property values plummet.  But they didn’t expect the LCRA Board to vote on a plan that could send about 15 percent of the water that remains in Lake Travis downstream.

“There’s very little water there now. They release, we have none. We were hoping our wells would recover because they are affected by the lake level. If the lakes come up, we get our wells back. If they don’t come up we have no water,” Wanda Watson told StateImpact Texas.


The LCRA won’t comment on the plan. But a spokesperson did forward along a copy of it. Under the plan, water will be released if the Highland Lakes are filled to 39 percent or higher on January first.  The Lakes currently sit around 42 percent full. The LCRA has also acknowledged that Wanda Watson is right. Lower lake levels will make is even harder for the well here to recover anytime soon. Meaning water will be trucked in for the foreseeable future.

A couple blocks from the Watsons an LCRA tanker truck is pumping water into the community’s water system just like is has been for months.  The LCRA had two trucks to bring water in, but one of them had an accident, likely due to speeding says the LCRA, on its way into Spicewood a couple weeks ago.  The driver was fine, but the truck was destroyed.

Now one truck is making the handful of required daily trips.  But that, too, might end soon.  The LCRA is in the process of selling the water system here to a Canadian Utility company called Corix. The deal still needs regulatory approval, but if it goes through, Corix may either dig a new well, or build a pipeline directly to the lake to suck water up and treat it for the residents here. The company isn’t sure which option it will take.

Tuehey said his company is also watching to see if more water goes downstream.  A new well could fail just like the old one did if water levels keep dropping.  But pumping directly from the lake is also costly, and requires additional water treatment.  And down at what used to be the shoreline of Spicewood Beach it looks like it would take a lot of pipe to reach a place deep enough to pump the water out.

“You can barely get your ankles wet. Great fishing when it’s got water,” said Wanda Watson.

But one thing is sure, says  Watson. If a long term solution to the community’s water crisis isn’t found, she doesn’t see how she and her husband can stay. That could mean one more “for sale” sign on one more lawn in Spicewood Beach.