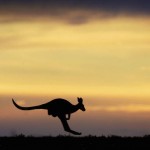 The Australian drought forced the country to make some tough decisions. Will Texas follow suit? 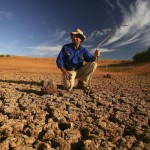 Stockman Gordon Litchfield from Wilpoorinna sheep and cattle station surveys the bottom of a dry dam on his property on June 7, 2005 in Leigh Creek, Australia. 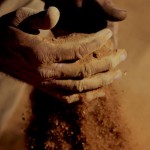 Stockman Gordon Litchfield from Wilpoorinna sheep and cattle station holds a handful of bull dust on his property June 7, 2005 in Leigh Creek, Australia. 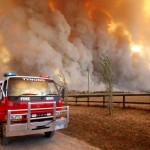 A Country Fire Authority (CFA) staff monitor a giant fire raging in the Bunyip State Park near Labertouche, some 125 kilometres west of Melbourne, on February 7, 2009. More than 40 blazes raged across two states as a once-in-a-century heatwave pushed the mercury as high as 46 degrees Celsius (115 Fahrenheit) with fire bans in place across much of the south-east, with conditions said to be the worst since the Ash Wednesday wildfires of 1983, which killed 75 people and razed 2,500 homes. 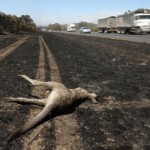 A dead kangaroo lies beside a burnt-out section of the Hume Highway near Seymour, some 100 kilometres north of Melbourne on February 9, 2009 as raging Australian wildfires left at least 131 people dead amid a landscape of charred homes, bodies and devastated communities. The wildfires have become the deadliest in Australia’s history, destroying entire towns and wiping out families and amid the heartache there was also anger as police revealed they suspected some of the fires were started by arsonists, whom Prime Minister Kevin Rudd accused of “mass murder.” 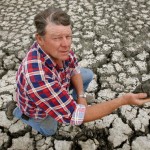 Farmer Marshall Rodda inspects an empty dam, leaving him with fields of stunted wheat stalks, normally thigh high, and which have only managed only a few inches growth in the parched earth of the Australian wheat belt in the fall of 2006. 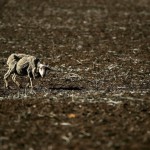 An emaciated sheep standing in a field June 13, 2005 near Port Augusta, Australia. 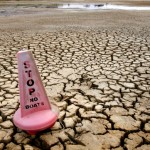 This photo taken 16 November, 2006 shows a warning sign for boats sitting on the bottom of the empty Green Hill Lake outside the small rural town of Ararat, some 170 kms west of Melbourne. 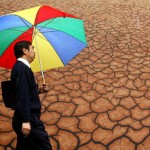 A man shelters from the rain under his umbrella as he passes a giant mural showing the drought-affected Australian outback which is blocking public view of a fountain, turned off to conserve water in Melbourne’s CBD, 18 May 2007. 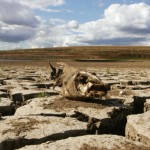 The remains of a fish lies on cracked ground at Wivenhoe Dam on April 10, 2007 in Queensland, Australia. 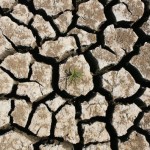 Cracked earth is seen at Wivenhoe Dam on April 10, 2007 in Brisbane, Australia. 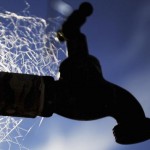 An outdoor tap has cobwebs from lack of use May 11, 2005 in Goulburn, Australia.

One question that comes up when looking at the Texas drought is, are there any examples of other droughts the state could look to? Texas isn’t alone dealing with the issues of water and drought, and one of the most recent examples of a large population dealing with drought comes from Australia. (You can see a slideshow of the Australian drought above.)

“Australia is the biggest drama that has recently played out in the world of water,” said Ralph Eberts, the Executive Vice President of Black & Veatch Water, at the Texas Water Summit at the University of Texas Monday. Australia is just now emerging from a severe decade-long drought. At the peak South East Queensland hung on with less than fifteen percent of its water supplies remaining. Aussie wildlife and agriculture took a considerable blow. And failed rice and grain crops threatened to unhinge the global food supply.

A parallel can be drawn between Australia’s drought experience and that of Texas. Australia, like Texas, was caught in a bind with no warning. The drought experience across Australia varied considerably, with different regions undergoing various levels of stress. Texas has witnessed this variability with West Texas drawing the shorter straw.

But the duration of the Australian drought led to markedly different results. Farmer Marshall Rodda inspects an empty dam, leaving him with fields of stunted wheat stalks in the parched earth of the Australian wheat belt in the fall of 2006.

Australians were forced to adopt a culture of conservation. Among the first water uses to be universally prohibited was lawn irrigation. Front yards quickly turned brown, and satellite imaging was used by the Australian authorities to locate those that illegally watered their lawns. Specific triggers were set to mark where new stages of drought response would be initiated. Stockman Gordon Litchfield from Wilpoorinna sheep and cattle station holds a handful of bull dust on his property June 7, 2005 in Leigh Creek, Australia.

Many of the technologies developed in response to the drought created climate-independent sources of water, meaning that they won’t rapidly disappear in the event of increasing temperatures or declining rainfall. Eberts contends that there are invaluable benefits from a resilient water system, including quality of life and overall public health. “Texas should sell water investment apart from drought needs,” says Eberts, investing now so that we don’t have to pay for damage later.

In the case of Australia, improvements initiated by the drought came to represent something much more – continued water security beyond immediate drought needs. Water availability, viewed as a perpetual need, became a priority, Eberts said.

The international standard for water systems development doesn’t stop with Australia. Both Singapore and Hong Kong have become aware of the importance of water. Singapore meets fifty percent of its total water demand with recycled water products alone. Cracked earth is seen at Wivenhoe Dam on April 10, 2007 in Brisbane, Australia.

Will Texas follow suit? The state has already witnessed innovative efforts in San Antonio and El Paso, where desalination plants have been employed to meet water demand. But Eberts says Texas as a whole still lacks a unified water plan. He points to this fact as a key vulnerability and offers an outline of what to do:

In moving forward, Eberts says, the Lone Star State might just benefit from the Outback experience.