Graywater recycling hasn't really caught on in Texas, mostly due to costs and permitting issues.

While some subdivisions and cities in the state already give you the option to construct dual-plumbing in houses built from scratch, the burden remains with the homeowner to install the full system to start recycling. Dual-plumbing allows homeowners to receive two sources of water via two separate plumbing systems. One delivers fresh, potable water while the other delivers recycled water.

Long-time reclaimed water specialist Don Vandertulip tells StateImpact Texas that the dividends aren’t always enough to outweigh installation and maintenance costs, which can reach as high as several thousand dollars. (Vandertulip has been involved in reclaimed water projects since 1978 and is currently active in numerous conservation organizations including the WateReuse Association, Water Environment Federation, and the American Water Works Association (AWWA).)

Why Your Water Might Cost More the Second Time Around

Unlike commercial reclaim systems, graywater systems typically serve a single home. They’re permitted at either the city or county level and they’re maintained by their private owners. For simple systems, fancy engineering firms stay out of the picture. END_OF_DOCUMENT_TOKEN_TO_BE_REPLACED Last winter’s poor performance, along with other factors, has created an unexpected positive. The June monthly Energy Review by the U.S. Energy Information Administration says that carbon dioxide emissions from energy use for the first quarter of 2012 were the lowest they’ve been in two decades.

High demand for heat from fossil fuels usually pushes carbon dioxide emissions to their highest during the first quarter of the year. But as discussed in a Today in Energy article, several factors prevented this from occurring:

During the first quarter, U.S. CO2 emissions totaled 1,340 million metric tons – a figure down 8 percent from 2011. Between natural gas, coal and petroleum, coal represented the largest decrease in carbon dioxide emissions. Coal emissions were down by 18 percent (387 million tons) as utilities increasingly chose to use cheaper natural gas resources over coal. Nine 'smart' irrigation controllers were tested during the 2011 drought.

A new report by the Texas AgriLife Extension Service says that only a few smart irrigation systems worked right during the drought.

Ideally, the sensors on smart controllers measure water loss due to evaporation, rainfall, temperature, solar radiation, and even relative humidity. The system should then use these measurements to determine just how parched the landscape is and when is best to apply irrigation.

But many of the controllers failed to meet plant water requirements over a testing period of 152 sweltering days.

The reason? Dr. Guy Fipps, an AgriLife Extension irrigation engineer, suggests that some controllers were simply unable to adapt. END_OF_DOCUMENT_TOKEN_TO_BE_REPLACED Earlier this month, the U.S. Energy Information Administration (EIA) announced that natural gas energy production finally tied with energy generated from coal in April. Now, that group is projecting that energy from coal-fired plants will likely contract in the next five years.

Between 2012 and 2016, almost 27 gigawatts of energy production from 175 coal-fired generators are expected to be lost – an amount that accounts for 8.5% of total coal-fired energy generation in 2011.

These losses are more than four times greater than the losses experienced during the last five-year period. And 2012, by all accounts, should be the largest one-year decline in coal power generation thus far with a total loss of 9 gigawatts.

According to the report by the U.S. Energy Information Administration, several factors have contributed to coal’s decline: END_OF_DOCUMENT_TOKEN_TO_BE_REPLACED Update, November 2013: Quakes have now struck in a different area outside of Fort Worth near the town of Azle and Eagle Mountain Lake. You can read about that series of quakes (and see them mapped) here.

Yet another earthquake has rattled North Texas. Early Tuesday morning, the city of Keene, 25 miles south of Fort Worth, experienced what the U.S. Geological Survey says was a 2.4 magnitude earthquake.

Earthquake events have been on the rise in an area that hasn’t really seen a whole lot of quakes in the past. That was before disposal wells were constructed nearby, used to dispose of wastewater from hydraulic fracturing, or “fracking.” (For an in-depth look at disposal wells, check out this report from ProPublica.)

“We’ve been looking at the question of whether the number of earthquakes occurring across the mid-continent has changed in recent years. And we find that there is a statistically significant increase in the rate just over the past several years. And many of these are in areas where we know there is a lot of energy activity,” U.S. Geological Survey geophysicist Bill Ellsworth tells StateImpact Texas.

(Update: Read about the Dec. 12 quake outside of Fort Worth here.)

In less than a month, the Johnson County area has been shaken by at least seven different quake events. END_OF_DOCUMENT_TOKEN_TO_BE_REPLACED

According to the EIA’s Annual Energy Outlook, natural gas production has increased. The reason? More drilling in “shale plays with high concentrations of natural gas” and “recent technological advances.” Texas has seen its fair share of this development with increased drilling in the Eagle Ford and Barnett Shale.

And the EIA projects that over the next 25 years, electricity generation from coal will fall to 38 percent – the result of increased competition from natural gas and renewable energy, along with the impact of new environmental regulations. But at the House joint hearing on energy and natural resources held last Wednesday, industry leaders gave representatives their side of the story.

“Even if we didn’t use another drop of water for drilling operations, water is still going to be an issue because of the drought and our state’s tremendous population growth. I want to be very clear. Hydraulic fracturing should not be the scapegoat for the water shortage in Texas,” said Porter. END_OF_DOCUMENT_TOKEN_TO_BE_REPLACED

A seismograph measures feet stomping nearby at the Thomas A. Jaggar Museum in Hawaii

Three earthquakes in six days. Those were the surprising numbers that greeted Texans on Monday morning. What’s becoming less surprising is the notion that they could have been man-made.  All three of the quakes (two near Dallas, one around San Antonio) happened near areas with extensive oil and gas excavation.

A scientific consensus is forming around the notion that wastewater disposal wells, a common byproduct of oil and gas drilling, are causing quakes. As that understanding grows, the debate has moved from what is causing the quakes to what policymakers should do about it. END_OF_DOCUMENT_TOKEN_TO_BE_REPLACED 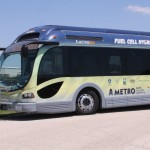 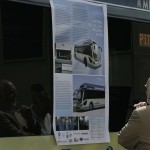 CEM Director, Robert Hebner studies the bus at the demonstration kick off event. 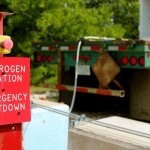 StateImpact takes a tour of the hydrogen fuel station at the Center for Electromechanics. 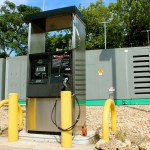 The hydrogen dispenser station looks a lot like a regular gas station. 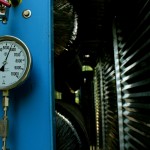 Six high pressure cylinders store hydrogen fuel on site. “At this station we can store approximately 80kg of hydrogen… With the amount of storage we have here we’re able to refill the bus daily to its full capacity,” said Program Director, Michael Lewis. 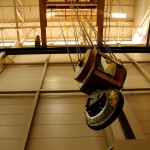 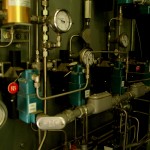 A series of gauges monitor the purity of the hydrogen gas produced. Only purified hydrogen gas is stored in the six high pressure cylinders. 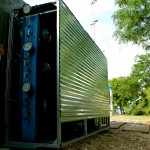 State of the art cylinders store hydrogen gas safely, even in Texas heat. 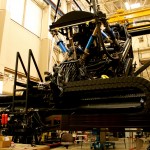 CEM researchers have developed additions for the Hobby-Eberly Telescope at the McDonald Observatory. 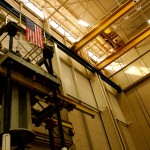 At any given time, CEM sponsors more than a dozen engineering projects. 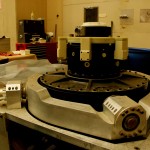 The wheels on the bus go round and round … but water is the only exhaust.

That’s what researchers at the Center for Electromechanics (CEM) at the University of Texas at Austin have to say about their new Hydrogen Hybrid Bus. The new bus will be featured as part of UT’s shuttle system and will alternate between the Forty Acres and Intramural Fields routes.

“The advantage is, frankly, that it uses less hydrogen. We take advantage of batteries to provide most of the propulsion power. And the fuel cell just recharges the batteries,” said Robert Hebner, director of CEM in an interview with StateImpact Texas. END_OF_DOCUMENT_TOKEN_TO_BE_REPLACED