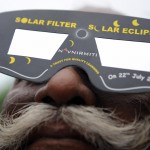 An Indian man uses protective goggles to view the solar eclipse in the village of Taregna, some 30 Kms. south of Patna early July 22, 2009. 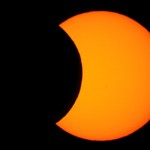 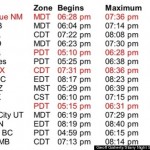 Chart outlining the places and times of the May 20, 2012 solar eclipse. 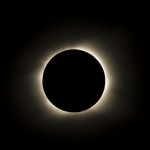 The sun is seen partially covered by the moon on Easter Island, 3700 km off the Chilean coast in the Pacific Ocean, on July 11, 2010. 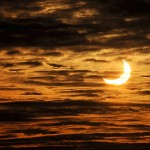 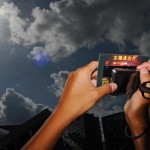 A man uses a filter to take a picture during the partial solar eclipse in Hong Kong on July 22, 2009. 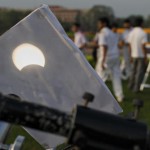 A telescope’s eyepiece projects a penumbra onto a screen during a solar eclipse over New Delhi on July 22, 2009. Only a partial eclipse was able to be seen from the Indian capital. 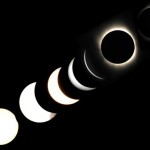 In this multiple exposure image taken on July 22, 2009 shows the various stages of the total solar eclipse in Baihata village, 30 kms from Guwahati, the capital city of the northeastern state of Assam. 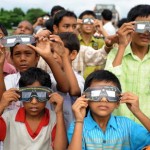 Indian youths use solar viewing goggles to view a solar eclipse in Siliguri on July 22, 2009.

You’re going to need something better than wayfarers this weekend. The first annular solar eclipse of the 21st century for the continental U.S. is coming to Texas Sunday. You can see photos of some notable eclipses in the slideshow above.

The eclipse will start in Eastern Asia and cross east over the Pacific, ending in Central Texas. Here’s an interactive map of where the eclipse will pass, with peak viewing times. NASA says the eclipse will begin at 7:35 pm in Texas and peak at sundown. The best views will be from West Texas, particularly Amarillo, Lubbock and Midland-Odessa, where the eclipse will peak right around 8:30 pm. For those of you in the big cities of Austin, Dallas-Fort Worth, Houston and San Antonio, you won’t get to see the full peak phase of the eclipse because the sun will have set by then. But you’ll still be able to see some of it.

An annular eclipse is close to a total eclipse, but not quite. With an annular solar eclipse, the moon directly passes between the earth and the sun, casting a shadow on the earth’s surface.  For a viewer on earth, the light from the sun is almost fully blocked creating a “ring of fire” around the moon.

NASA cautions viewers to not look directly at the sun and to not rely on standard sunglasses. Looking directly at the eclipse can cause permanent eye damage. “The ring of sunlight during annularity is blindingly bright,” Fred Ezpenack, an eclipse expert at NASA, warns on their website.

“Even though most of the Sun’s disk will be covered, you still need to use a solar filter or some type of projection technique. A No. 14 welder’s glass is a good choice. There are also many commercially available solar filters.”

Jillian Schantz is an intern with KUT News.