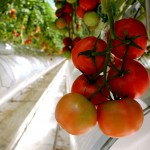 Tomatoes on the vine at Village Farms new thirty-acre greenhouse in Monahans, Texas. 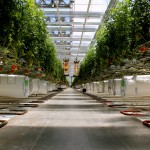 The vines are suspended from the ceiling, with large cylinders circulating air beneath them. 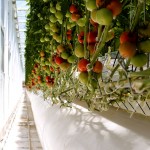 The tomatoes are grown in coco peat instead of soil, greatly reducing impact on land and waterways. 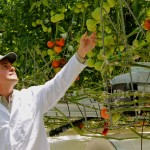 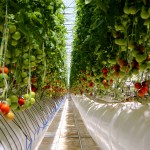 Computers control temperature, air and humidity. Bees are allowed in for pollination, but other bugs are kept out, eliminating the need for pesticides. Large tubes keep air circulating beneath the tomatoes. 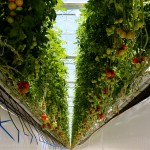 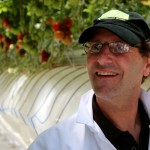 Doug Kling says “there’s a peacefulness” to the greenhouse. 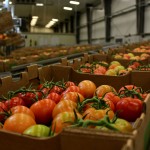 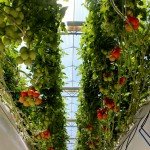 Precisely-beveled glass diffuses light on the tomatoes, providing equal amounts of sunlight to the crop. 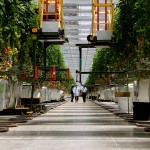 Next time you buy a Texas tomato, check where it was grown. The answer might surprise you. That’s because ninety percent of the state’s tomatoes come from a few greenhouses in the arid deserts of Far West Texas. (You can see a detailed breakdown of how the process works in the slideshow above.)

The latest addition to that group is a massive glass facility in Monahans, outside of Odessa. It officially opened for business this week.

“Well, when you look at this, this is like a giant, 15-acre, indoor garden,” says Doug Kling, Senior Vice President for Village Farms, which owns and operates the greenhouse. “Pollinated [by] bees, and grown naturally. Where the sunlight comes in and you can smell the calyx. It’s kind of exciting. There’s a peacefulness to it.”

So how exactly do you grow tomatoes in the desert? Doug Kling says "there's a peacefulness" to the greenhouse.

“The way this works is, we don’t grow in the soil. We grow in a steril environment, like coco peat,” says Kling. “There’s no hard minerals in that, like arsenic. So what we do is, we control the environment by controlling the airflow in the greenhouse, closing the vents off, misting from the top to makes sure it’s humid enough so the plants don’t dry out.”

The plants are “infused” in water in the coco peat, and any runoff is captured in a gutter underneath. “We recycle that up to five times,” Kling says, “which allows us to use 87 percent less water than in the field.” That water is then sent to the city golf course. “And because of the ultimate climate conditions,” Kling adds, “we get thirty times the yield of a [traditional] field per acre.”

Bees are allowed in to pollinate, but other bugs are kept out, eliminating the need for pesticides. Texas Commissioner of Agriculture Todd Staples was on hand for the ribbon-cutting. He invited a group of reporters, including StateImpact Texas, to fly out with him.

“We have a facility here that uses one-fifth of the water of traditionally field grown crops and has forty times the yield,” Staples says. “It’s a phenomenal system that’s been put together and really an example of the future.”

Village Farms says the project will bring 400 full-time jobs to the area. The company plans to expand the facility to over 120 acres of greenhouse farming in the coming years.