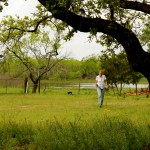 Pati Jacobs on her cattle ranch outside of Bastrop, Texas 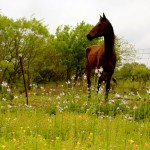 “Four months ago this was just bare dirt. There was nothing,” Jacobs says. 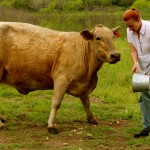 Jacobs says the drought has been “devastating.” 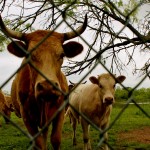 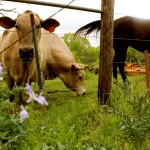 During the peak of the drought, the cows here grew starkly thin and had no grass to graze on. 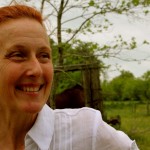 “What most people don’t realize, this wasn’t a one-year drought,” Jacobs says. 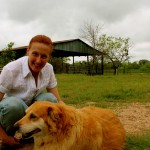 Jacobs say the drought has likely put many ranchers out of business.

There is no way to overstate the severity of the drought. Last year Texas had its driest year on record, paired with some of the highest temperatures we’ve ever seen. But even as the situation has improved for some thanks to a relatively wet winter, other parts of the state are still in the worst stage of drought.

For ranchers like Pati Jacobs at the Bastrop Cattle Company ranch east of Austin, Texas, the toll of the drought was enormous. Pointing to a stock tank on her 235-acre ranch, she notes that just a few months ago it was completely dry. And the same goes for the grass her cattle like to graze on. “Four months ago this was just bare dirt,” she says. “There was nothing.”

In the fall of 2010, Texas entered the worst single-year drought in its history. Without rain, lakes dried up, grass died, and millions of acres burned in wildfires. “We lost effectively between 600,000 and a million head of cattle out of this state,” Jacobs says. “And what most people don’t realize, this wasn’t a one-year drought. This actually has been going for three or four years, and we’re not out of it yet.”

“These numbers are unprecedented,” says Todd Staples, Texas’ Commissioner of Agriculture, of the near eight billion dollars in agricultural losses due to the drought. “And this is a new record for the Lone Star State. Unfortunately, we like to set new records but this is not the direction we want to go.”

While crop insurance covered many farmers, for Texas ranchers like Jacobs, it’s been a different story.

“It’s been devastating, because if you sell out your breeding herd, which a lot of them had to do, and you look at the pricing at what you got then and what you have to pay now to re-stock, a lot of them aren’t going to get back into the business,” she says. “They just don’t have the capital to do it.”

For some ranchers,this year’s wet winter was a godsend. And the big cities like Dallas, Houston, Austin and San Antonio are either drought-free or getting close. But in the far western part of the state, the extreme drought continues.

“Last year was the devil’s advocate, I guess,” says Neal Newsom, who grows wine grapes in far West Texas. “We had some zero degree weather during the winter, which is too cold for grapes. And then on May 7th we had the latest freeze in history. And we just thought it was getting bad and then the drought starts, and it seemed like after that all that was left was the asteroid that took out the dinosaurs was next.”

Newsom says that even though there have been a few snows this winter, they’re still very dry. “The winds are starting to kick up now, so the dust is staring to move around,” he says. “Here we go again if we don’t get some rains pretty soon.”

So what did Texas do to get itself in this predicament? It’s simple. Much like its government and citizens, the Texas climate is notably independent from the rest of the country.

“Very little water enters this state from outside of the state, and that’s only on the Rio Grande,” says Raymond Slade, a hydrologist who follows water issues in Texas. “All other rivers originate from in this state, so when we don’t have rain, this state is the one that suffers.”

Slade says that even though things are green now in much of the state, the drought isn’t over. “Unfortunately the lakes are still not full across the state and the streams are still not back to normal,” he says. “So this drought continues as far as water availability.”

Everyone is hoping a relatively wet winter will lead to an even wetter spring. But some scientists like Raymond Slade aren’t optimistic. “It’s projected it could get worse,” he says. “We may have below what’s been normal rainfall, could be below for the next few years.”

And for all the talk of funding plans for a drier future combined with a growing population, no one’s sure where the money will come from. Texas is known for limited government and deep budget cuts. Slade finds himself frustrated. “I’ve told many people that the drought needs to continue, because regardless of what scientists say, planners aren’t planning, the legislature’s not funding money for drought management strategies,” he says. “So the drought, in my opinion, needs to continue for another year or two to get people’s attention.”

But for the farmers and ranchers in the west, that would only add to their misery.