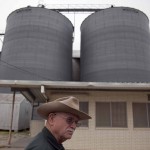 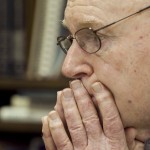 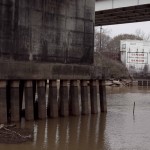 The intake from the Lower Colorado River sends water into irrigation canals. This year it will sit idle. 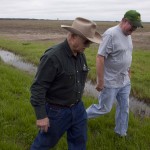 Rice farmers in southeast Texas like Billy Mann may face another year of little to no water from the Highland Lakes for irrigation. 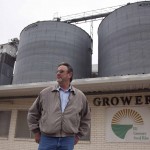 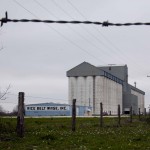 Many rice mills and drying and storage facilities in Southeast Texas didn’t see much work last year. If they’re cut off again this year, the slow business will continue.

As the clock struck midnight Thursday, many rice farmers across southeast Texas had to face a sobering reality: for the first time in history, they will not have water for their crops. “It saddens me because like I said, my family’s been farming rice since 1905,” says rice farmer Paul Sliva. “This will be the first year we haven’t. There’s no other crop than rice for me. It’s gonna be a weird year. It’s gonna be a sad year for me.”

How did this happen? Under an emergency plan to deal with the drought, the Lower Colorado River Authority cut off water to the rice farmers downstream in Matagorda, Wharton and Colorado counties because there wasn’t a enough water in the lakes. They were about a billion gallons short.

The lakes that hold that water mean different things to different people. For the people that live on the lakes – and many of whom make their living off of them – they’re a boon to property values and business. But when massive amounts of water were sent downstream to rice farmers last year, more than three times the amount used by all of Austin, in the midst of a record drought no less, the lakes neared historic lows. And that hurt the lake interests, like the construction company owned by Buster Cole. He says rice farmers don’t appreciate the financial impact of their withdrawals from the lake.

“They have no respect for the impact of what’s happening on our Highland Lakes, from economic property values, business owners, all the things involved,” Cole says. “Everybody’s involved in this, and it’s bad.”

For the city of Austin and many factories and some power plants, the lakes are a crucial source of water. And for the rice farmers? They say the water in the lakes is practically a birthright.

“In a sense it’s our water,” says Haskell Simon, a rice farmer in Matagorda County. He says that without people like him growing rice, we wouldn’t have the lakes and dams we do today. “In order to give a more assured supply of water for that burgeoning industry, there was a pressure to develop those storage facilities which are now the Highland Lakes,” he says.

But as the population of Central Texas has grown, with new factories and power plants along with it, rice farmers have faced an uphill battle convincing people that the water belongs to them. And in the future – they’ll be getting less water.

“It’s no doubt that there’s more and more of a claim on the water in the basin every year,” says Joe Crane, who has a rice farm in Bay City and several other businesses that rely on the rice industry. “The rice industry just needs time. We’re right on the cusp of some technological changes that will allow us to grow more rice with less water.”

Some of those technological changes include new genetically-modified strains of rice that need less water. Farmers are also drilling their own wells, but that can cost a quarter million dollars. And many farmers have used lasers to level their fields, resulting in significant reductions in how much water they use. But none of these options solves the problem of finding more water for a thirsty crop. That’s where a new plan comes in: take water flowing into the Lower Colorado below the Lakes and store it. “The drainage area of the Colorado river below Austin is sufficiently large that in good rainfall years, enough water flows into the Colorado below the dams for our needs,” says Haskell Simon, the Matagorda County rice farmer.

To store that water, the LCRA is making a plan to build “off-channel reservoirs:” small offshoots of the river that capture water during heavy rains.

But who’s going to pay for it? The LCRA says that’s still an open question. The rice farmers are looking to the Department of Agriculture for help.

Video: In Their Own Words — What No Water Means for Texas Rice Farmers