Image Couresy of the Texas Tribune.

The Railroad Commission of Texas is under review by the Texas Sunset Advisory Commission.

The crowd at the Sunset Advisory Commission hearing at the state Capitol on Tuesday was a veritable who’s who of Austin government insiders, officials and activists. That lead to at least one comedic moment when Sunset Commission Chair Dennis Bonnen called “Jim Mann” to give testimony and two men approached the dais.

One was Jim Mann, a Special Commissioner of condemnation hearings in DeWitt County. He was there to criticize the system by which the Railroad Commission gives pipeline companies the right to eminent domain.

The other was James Mann, a lawyer for the Texas Pipeline Association.

“I was gonna introduce y’all,” joked Rep. Bonnen, [R-Angleton] as the two men shook hands and sat down next to each other. The crowd broke into laughter.

END_OF_DOCUMENT_TOKEN_TO_BE_REPLACED Many people who lived through the hot Texas summer of 2011 remember it with something approaching shell shock. The weeks upon weeks of 100-degree heat, the drought that crippled agriculture and contributed to widespread wildfires. Nothing, it seemed, could ever approach such a summer again.

But that doesn’t mean the state isn’t breaking heat records again this year.

Earlier this fall 2012 was projected to be Texas’ fourth hottest year on record when it comes to average temperature. That surprised many of our readers, and it’s no wonder.  After 2011, this year seemed like a welcome relief. But, if you take average temperatures from the entire year, it now turns out 2012 won’t likely be the fourth hottest year.

It will likely be the hottest year, on average, in Texas history.

END_OF_DOCUMENT_TOKEN_TO_BE_REPLACED Many Americans opt for fake trees like this one during the holiday season.

Here’s a little known fact: fake Christmas trees were invented to help the environment. The first artificial trees were created in Germany in the 19th century. Made of goose feathers painted green, the trees were intended to prevent deforestation, according to researcher James Hewitt.  These days trees are made of metal and plastic and shipped in from China, prompting a lot of people to worry about their environmental impact.

Last week we reported on a recent study that said those concerns were overblown. Although, a lot can be done to lessen the impact of either fake or real trees, the reality is that either of the two options has less of an environmental impact than the typical daily actions of someone in the United States. The study says, “The impact of the tree life cycle, for all scenarios, is less than 0.1% of a person’s annual carbon footprint and therefore is negligible within the context of the average American’s lifestyle.”

A lot of you had problems with the study or were looking for more information. We decided to follow up with some of your burning questions. Here’s a look at your responses to the “settled” debate about the impact of holiday trees.

END_OF_DOCUMENT_TOKEN_TO_BE_REPLACED Ruling in favor of the Canadian company behind the controversial pipeline, TransCanada, Nacogdoches County Court at Law Judge Jack Sinz reversed the restraining order, allowing TransCanada to continue construction on Bishop’s land. The two sides will meet in court again next week, when the County holds a hearing on December 19 to hear Bishop’s allegations of fraud against TransCanada. Bishop is also going after the state for permitting the southern portion of the pipeline.

“I didn’t pick this fight, but I refuse to sit idly by while a multinational corporation tramples my rights and that of other landowners all along Keystone XL’s path in the name of deepening its profits,” landowner Mike Bishop said in an emailed statement.

A Nacogdoches County Court granted a temporary restraining order to Texas landowner Mike Bishop today. The order will prevent the company TransCanada from building the Keystone XL pipeline on Bishop’s land until a scheduled injunction hearing next week. END_OF_DOCUMENT_TOKEN_TO_BE_REPLACED A man pulls out a Christmas tree he chose and cut down himself in a forest on December 8, 2012 in Fischbach, Germany.

Well, the debate is over. When it comes to picking a low-impact holiday tree, it turns out the choice between fake and artificial trees, call it a wash. A peer reviewed study released last year compared carbon footprints of artificial and natural trees. The findings showed that the difference in environmental impact between the two is negligible, with artificial trees having a slightly larger impact.

The study unpacked several consumer myths about holiday trees. The reality is that cutting down or buying a Christmas tree has less of an environmental impact than the daily impact of someone living for one day in the United States.

“The reality is that the long distance transport from China is pretty efficient,” says Laura Morrison, a Senior Consultant at PE International. She worked on the study and says that consumers should be more concerned about how far they drive personally to purchase their tree. Even if the tree has been shipped in from another state, it’s the personal drive home that significantly increases the carbon output. END_OF_DOCUMENT_TOKEN_TO_BE_REPLACED 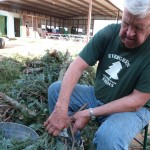 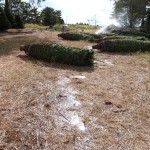 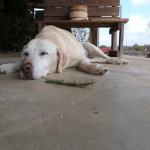 While owners Mike and Beth are hard at work, their dog rests on the cement porch at the farm. 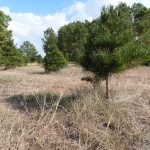 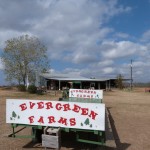 Customers at Evergreen Farms ride the trailer to the tree fields where they can pick out and cut their own tree. 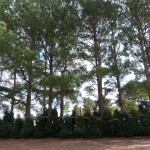 Drought takes no prisoners, and Christmas trees are no exception. The 2011 drought decimated Texas wildlife, and not even resilient evergreens could take the heat. This left Christmas tree farmers in Texas with little or no trees to sell during the holidays. Some farms, like Evergreen Farms in Elgin, shipped in trees from Washington State and North Carolina to sell instead. Other farms had no choice but to close their doors.

This year, things have changed.

“We didn’t lose any from the drought this year, and we lost hundreds and hundreds last year,” says Mike Walterscheidt, owner of Evergreen Farms.

This year’s wetter summer weather improved tree growth, so Evergreen Farms is back to cutting down trees in the field. END_OF_DOCUMENT_TOKEN_TO_BE_REPLACED Over 4 million acres burned in Texas wildfires last year, the worst in the state's history. In this photo, Texas State Troopers Aaron Lewis and Greg Sullivan open a gate to allow livestock to escape a running wildfire on April 19, 2011 in Graford, Texas.

Historic wildfires blazed through Texas last year, burning over 4 million acres and destroying nearly 3,000 homes throughout the state. Over a year later, affected areas are slowly recovering. Donations of seedlings and trees are part of the recovery effort, helping re-grow the area’s lost foliage.

Texas A&M Forest Service with Texas Garden Clubs is joining the effort to replenish the tree population west of Fort Worth. On December 15, they will be handing out a hundred trees to the affected Possum Kingdom-area community.

“We want to give some hope and help them re-green the area surrounding their homes,” Forester Courtney Blevins says in a press release. END_OF_DOCUMENT_TOKEN_TO_BE_REPLACED The Sunset Advisory Commission, a state agency dedicated to reviewing how the rest of the state agencies are working and spending money, just released this thing called “The Sunset Report”. Well, they actually released several reports. The reviews look closely at some state agencies, deciding whether or not the institutions should be put on the chopping block.

As we reported earlier this week, the Texas Railroad Commission recently received a Sunset review. Proposed changes include a name change, as well as campaign finance restrictions for commissioners. Before the Sunset legislation is called to a vote next year, we thought we’d take a moment to break down exactly who the Texas Sunset Advisory Commission is and how these Sunset Reports came to be.

What is the Texas Sunset Advisory Commission?

The Sunset Advisory Commission began in 1977 as a way to look closely at the effectiveness of Texas state agencies and determine their utility and worth. The Commission is made of 5 Texas House Members, 5 Senators, and 2 members of the public, appointed by the lieutenant governor and the speaker of the House of Representatives. The Commission’s main function is to propose Sunset review recommendations to the Texas Legislature as a Sunset Bill.

So what is a Sunset review exactly? END_OF_DOCUMENT_TOKEN_TO_BE_REPLACED

Barry Smitherman is the Chair of the Railroad Commission of Texas.

“What does the Texas Railroad Commission oversee?” If it was a question on Who Wants to Be A Millionaire?, a lot of Texans would lose their spot in the hot seat.

Here’s a hint: the answer is not “railroads.” In fact, the commission regulates Texas’ booming oil and gas industry.

So the first suggestion in the recently released Sunset Report (a review of state agencies) is a name change. Apparently, the agency still receives complaints about train noise.

Commission Chairman Barry Smitherman says changing their name is a good idea. “With the increase of oil and gas activity I think we would be well-served to have a name that is easy for the public to understand,” he told StateImpact Texas.

Though the Railroad Commission does raise concerns over the proposal in its official response to the Sunset report, saying that a name change without an amendment to references to the “Railroad Commission” in the state constitution could lead to legal trouble for the agency.

Whether or not the Railroad Commission becomes the “Texas Energy Resources Commission” (the suggested new name) will be up to state lawmakers in the upcoming legislative session.

END_OF_DOCUMENT_TOKEN_TO_BE_REPLACED So creating something that can store and save renewable energy like wind and solar for later would change the game entirely. END_OF_DOCUMENT_TOKEN_TO_BE_REPLACED