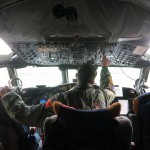 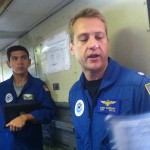 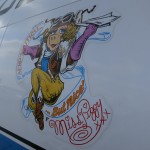 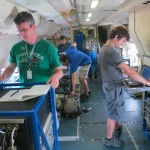 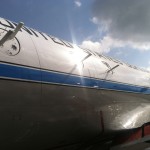 One thing they want to know is what fraction of the stuff being extracted really just ends up in the atmosphere — that’s called the “leak rate.” It changes from oil field to oil field.

There are a lot of factors that make one field leak more than another, like exactly what is being pumped from the ground, the techniques and equipment used, and the strength or weakness of regulation in the state where it’s all going on.

“We’d like to know where that variability comes from,” de Gouw said.

They’re doing it with a little help from Miss Piggy. That’s the four-engine turboprop airplane the team uses. (Fun fact: NOAA also has a Kermit and a Gonzo plane.)

Mark Sweeny is the aircraft commander, and he’s not worried about airsickness. Unlike some scientists, and at least one public radio reporter, NOAA pilots are used to choppier missions, like flying into hurricanes. Stickers on the side of the plane commemorate every Hurricane it has flown into.

Miss Piggy’s got 89 under her belt.

“Yeah, she’s been around a while and has definitely seen some action,” Sweeny said.

Miss Piggy’s cabin has been stripped down and rebuilt as a flying lab. Ahead of the flight, scientists are doing work on the equipment that lines the walls. When they get in the air, a team on board and one on the ground will measure readings upwind and downwind of oil and gas activity.

Jeff Peischl is one of those researchers. An atmospheric scientist, he monitors methane, ethane and ammonia.

“Basically I’m sucking air in through that tube, and it goes into the instrument and then back out the belly of the plane at the exhaust,” Peischl said.

Part of his job is to figure out what methane comes from fossil fuel, and what comes from other sources — like cows. So, I had to ask.

“No…you can’t smell methane really. But you can smell ammonia if you’re downwind of a feedlot,” Peischl said.

The team has wrapped up operations in Texas, but their work is not done. Next stop: the Bakken shale fields of North Dakota.