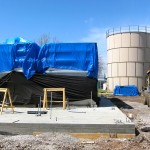 Construction on the community’s new well system and treatment facility began only about a month ago. 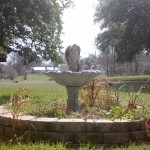 Most Spicewood Beach residents came here to retire with modest savings. Now they feel stuck in depreciated homes with a strained water supply. 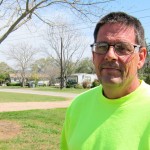 In recent months, the community has received some winter rain. Come summertime though, resident Steve Duich says his front lawn will look “like a parking lot.” 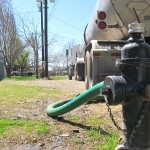 LCRA trucks water into this neighborhood five to six times a day. This began in early 2012 as a temporary solution. 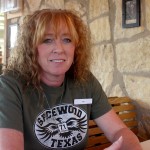 Kim Clifton, a cashier, says her business has managed to keep busy as the only general store in Spicewood Beach. Other businesses can’t stay afloat in this small, tourist driven economy. 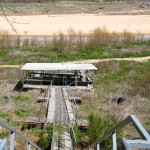 Boat docks that once drifted along the shores of Lake Travis now rest on a dry bed of grass and rocks.. 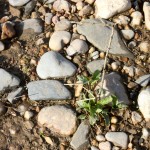 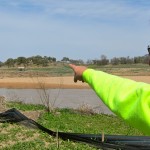 Duich points high above the stream of Lake Travis to show where the water have dropped from in recent years. 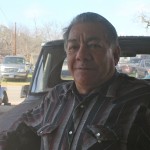 Tony Castillo, like many residents here, has resigned himself to a constantly unstable water supply.

Behind the counter of a general store just off Highway 71, Kim Clifton, the cashier, shrugs her shoulders and shakes her head when asked about the lingering drought. “We just need more rain,” she says. She rolls her head back to let out an exasperated laugh, “Bring the rain! Bring it!”

It’s something you hear all the time these days across Texas, but chances are you’ll hear it the most in Spicewood Beach, Texas, a Lake Travis community about 40 miles from Austin. Just a little over two years ago, it made headlines as the first community in Texas to run out of water during the current drought.

In early 2012, the Lower Colorado River Authority (LCRA), which owns and manages the community’s water system, announced that groundwater levels were falling, leaving its well useless.

Those levels got so low LCRA began trucking in water five to six times a day as a temporary solution. Each load costs LCRA about 200 dollars.

Now, over two years later, LCRA plans to put the finishing touches on a new well system costing over a million dollars. The system was supposed to be completed last summer, but construction began just last month.

Ryan Rowney, LCRA’s water operations Vice President, blames the delay on permit issues and bad weather. He says “weather conditions in the Northeast have certainly impacted deliveries in some instances.”

But that weather struck well after the plant was supposed to be completed. Kim Clifton, a cashier, says her business has managed to keep busy as the only general store in Spicewood Beach. Other businesses can't stay afloat in this small, tourist driven economy.

The new well system is scheduled to be completed this week. Until that happens, water continues to arrive by the truckload in the tiny neighborhood, giving residents like Kathy Mull what is barely needed to get by.

Like most of the older, middle-income residents in this small community of about 1,100 people, Mull came here to retire. But now Mull and her neighbors feel stuck in homes that have depreciated in value under Stage 4 emergency water restrictions. This limits residents to only essential water use and bans all outdoor watering.

“My yard was essentially flawless,” Steve Duich, President of Spicewood Beach’s Property Owner’s Association, says. “And if you look at it now, it looks like a parking lot.” In recent months, the community has received some winter rain. Come summertime though, resident Steve Duich says his front lawn will look "like a parking lot."

Just blocks from the tiny circuit of homes, a yellow blanket of grass has replaced the golf course. Empty cabanas line the border of a cliff where boat ramps and docks nestle against rocks.

Far beyond the lonely boat ramps drifts what’s left of Lake Travis. The lake will connect to the community’s water system once LCRA builds a new underground well. It will replace the old, above-ground well that took from the water below Lake Travis.

With no golf course to tee off from, residents often find themselves playing the blame game.  And all fingers point at the LCRA.

When LCRA bought the Spicewood Beach water system in 1999, the agency expanded the system to service a total of about 500 meters, which includes Lakeside Beach, Eagle Bluff and Lake Oaks. Two companies even contracted to haul water out of the system to surrounding areas in the year leading up to the well failure.

Spicewood Beach: The First Texas Community to Run Dry During the Drought

“The existent POA members feel that LCRA crashed the system and did not react quickly enough to correct it,” Duich says. “The idea was that they took the infrastructure and ran with it and made as much money as possible and then we’re left holding the bag.”

Rowney of LCRA says the agency has done right by the community.

“No one’s run out of water,” Rowney says. “That’s been some of the misconception about that whole system is that folks ran out of water and they didn’t have any water to drink, and that has not been the case.”

Once the project finally comes together, Spicewood Beach will see another change. LCRA will sell the newly constructed water system to Corix, a private utilities company.

Darrin Barker, Corix utilities operations manager, says the company has promised to keep LCRA’s current water rates for one year upon ownership. After that? Construction on the community's new well system and treatment facility began only about a month ago.

“It’s probably likely that a rate adjustment is going to be needed with the capital investments that we’re making across many of the systems that we’ve acquired from LCRA,” Barker says.

More and more in Texas, rural homeowners are finding themselves with newly-privatized water supplies. Corix now owns more than 18 water systems previously managed by LCRA. Often, those homeowners must choose between paying much higher rates or going without water.

Many here in Spicewood Beach worry about what the future holds for their water. But most have resigned themselves to an unstable supply.

“They do what they’re gonna do,” Tony Castillo, a resident says. “We’re just over here hoping it rains.”