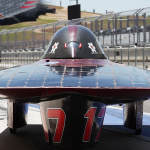 A solar car at the Formula 1 track in Austin 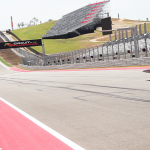 Turn one, with its steep hill, was a big challenge for the racers 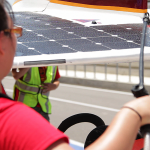 The shell of a solar racing car is lifted up after a car comes into the pit for repairs. 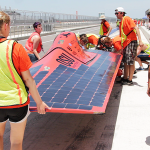 The race isn’t about speed, it’s about endurance. Whichever team does the most laps in 3 days, wins. 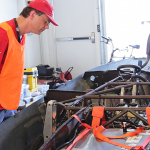 Taking a look inside the car 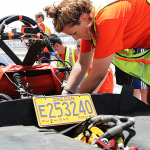 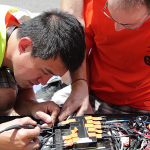 If the teams race too fast, the batteries will drain too quickly 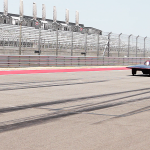 A solar car approaches the pit 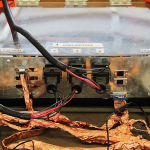 The battery, up close

It’s a sweltering Texas summer day in late June, and here at the Circuit of the Americas Formula 1 race track in Austin, the stands are empty. Just last fall, they were filled with fans witnessing the deafening roar of cars going upward of 200 miles an hour.

But if you were to listen closely this summer day, you’d hear a barely audible zooming on the track. Peek down from the stands, and you’d see little pods zipping along the track at a brisk 45 miles an hour. They’re solar-powered cars, part of the annual Formula Sun Grand Prix competition, where several teams of college engineering students race against each other, and the constant drain of batteries.

Last year, a solar-powered yacht sailed all the way around the globe for the first time. A few weeks ago, a solar-powered plane completed a trip across the country. As oil prices and carbon emissions rise, could solar-powered transportation be a cheaper, cleaner way to get around?

The solar cars racing here in Austin are low, sleek, flat vehicles covered in solar panels that look like something out of the Jetsons. They’re not exactly known for speed.

“We’ve calculated that it could go 80, maybe 88?” says Anne Hildebrand of Oregon State University as she straps on a helmet while getting ready to drive her team’s car for a shift. “But we can’t do that, because it’s not legal on any roads. So, we’re kinda bound by the speed limits,” she says with a chuckle.

The Solar Grand Prix isn’t about speed. It’s an endurance race. The cars do laps all day, then charge batteries in the evening til the sun goes down. Whatever car does the most laps in three days using nothing but the sun, wins.

In the Oregon State pit, there’s plenty of clinking and clanking to get the car back on the track. Some parts inevitably break, others overheat. A few years ago, the team actually had their solar car catch on fire as it was getting ready to drive in a parade. This year they’re back with a new car, aptly named The Phoenix. For the next three days, they’ll drive it over 600 miles.

With solar-powered transit making headlines, by land, air and sea, is it time to look at solar as a cheap, clean transit option for the future? Photo courtesy of the Webber Group

Roger Duncan says that in the future, solar panels will be ubiquitous.

“We’re really not looking at solar as a mass transit option or commercial transportation option for large volumes of people,” says Roger Duncan, a research associate at the University of Texas at Austin and former head of Austin’s energy utility.

Duncan points out that solar-powered cars, planes and boats are really only good for a single passenger at this point. And the machinery is heavy – those planes and boats have lots of metal that takes a lot of power to move — it’s difficult to do that with solar energy directly. When they do move on solar, it’s not very fast. Right now, solar power found on consumer vehicles only has enough juice a fan to keep the car cooler while it’s parked.

“However, we need to understand that solar power occurs in many different forms,” Duncan says. “In fact, the electric vehicles that are starting to be purchased around the county – and I own a plug-in hybrid vehicle – can indeed be powered by solar.”

Duncan sees a future where there are solar panels everywhere, feeding power into the electric grid and into lots of cars.

“Well, I think in the future you will see solar become ubiquitous. It’s going to be on car ports, and rooftops and walls. Just about everywhere.” Almost any flat surface will ultimately do, Duncan says, even on roads.

That optimism is shared by the newest U.S. Secretary of Energy, Dr. Ernest Moniz. He was there when that solar power plane finished its long trek across the country recently. And he said at the time that we can expect to see solar shine in unexpected ways.

“You know, we look back ten years, and we say, ‘Wow, the world looks really different today,’” Moniz said, pointing to the advent of smartphones as one example. “But when we look ten years ahead, we think the world’s gonna look the same. And it’s not!”

Back at the racetrack, the students’ goal is to design cars that don’t need charging stations or electrical outlets. They want cars that run on sunshine alone. And they’re patient about it.

“It took 2 years to build the car,” says Loren Brown, a student on the Oregon State team. “Then we race it and fix things. Race it again. Change something. Race it — or not even race, really, just drive it in the parking lot til something breaks.”

Oregon State was the winning team here at the 2013 Formula Sun Grand Prix, going around the track 193 times over the three-day endurance test. Since the race first began in 2000, the cars have driven tens of thousands of miles, and they’re getting faster and lighter. Solar cars that used to have lead acid batteries weighing over three hundred pounds have been replaced by lithium batteries that weigh just a few dozen pounds.

“I don’t know if we’re doing anything new or groundbreaking, but I think we’re learning a lot,” Brown says. “That’s why I’m here. This is highly applicable knowledge to anything I do in the future.”

But each advance requires lots of painstaking effort, and Duncan of the University of Texas cautions that solar panels will have to run a long race to become as cheap as fossil fuels. For now at least, solar’s likely to stay on the roof.

“If you look historically, we’ve changed fuels in the past,” Duncan says. “We were on wood for millennia. And then we got on fossil fuels — first coal, then oil, then gas. And now we’re starting to move towards wind and solar. But historically, these kinds of transitions have taken decades, if not centuries.”