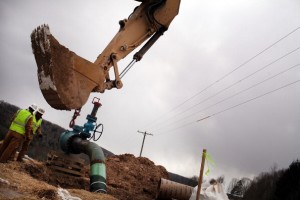 SOUTH MONTROSE, PA – JANUARY 18: Hydraulic fracturing, also known as fracking, stimulates gas production by injecting wells with high volumes of chemical-laced water in order to free-up pockets of natural gas below. The process is controversial with critics saying it could poison water supplies, while the natural-gas industry says it’s been used safely for decades. While New York State has yet to decide whether to allow fracking, economically struggling Binghamton has passed a drilling ban which prohibits any exploration or extraction of natural gas in the city for the next two years. The Marcellus Shale Gas Feld extends through parts of New York State, Pennsylvania, Ohio and West Virginia and could hold up to 500 trillion cubic feet of natural gas. ()