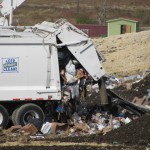 In the Texas Hill Country, one landfill’s trash powers homes 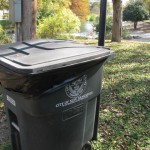 New Braunfels is best known for its clear-running rivers, the Guadalupe and the Comal seen here behind a city waste container. 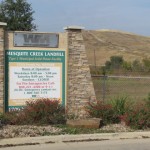 For over two decades, trash from New Braunfels headed to the Mesquite Creek Landfill on the edge of town. 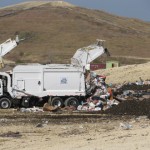 Garbage rich in organic matter arrives by the ton. 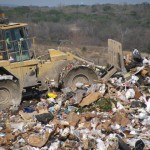 Compacted by heavy equipment, each “cell” of trash covers some 15 acres and will eventually be covered with soil. 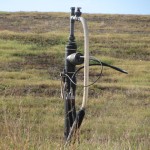 A gas recovery system is made up of 2.5 miles of pipe and 67 gas extraction wells. 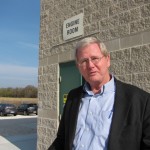 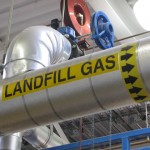 From the landfill, the methane gas is piped to a cement-block building across the road. 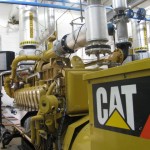 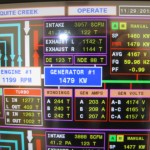 Each engine cranks out about 1500 kilowatts 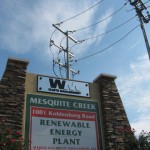 The electricity is then sent to the electric grid, enough to power up to 1800 homes in New Braunfels. 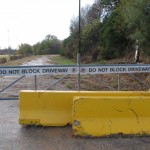 Landfills keep on producing methane for decades. This is the entrance to a city landfill in Houston and though closed in 1970, it’s listed by the US EPA as a potential project to produce methane for nearby industries.

According to the Environmental Protection Agency (EPA), there are 27 landfills in Texas that are producing enough methane gas to make electricity or provide fuel to power industrial equipment. The agency says another 57 landfills are candidates for such projects.

“Texas is one of the few remaining states with a large number of landfills that don’t already have landfill gas energy projects and may have the potential to support them,” the EPA wrote in a lengthy statement emailed to StateImpact Texas.

It’s gas from garbage: methane is what results from trash as it rots. Capturing and putting the methane gas to good use is important because, according to the EPA, municipal landfills account for 17% of all man-made methane — a greenhouse gas — released into the atmosphere. But a couple factors are making future projects iffy.

“There are some projects, I’d think, in Texas that right now the market cannot support,” said Paul Pabor, with Houston-based disposal giant Waste Management. Pabor is Vice President of Renewable Energy and oversees the company’s power generating landfills. It has 76 nationwide, with 12 of them in Texas.

But while Waste Management completed two projects just last year in the state, Pabor says the climate now is less favorable. One reason is the price of natural gas a few years ago was far higher. That meant that landfill methane gas was competitive. Now, with so much natural gas resulting from the surge in drilling in Texas and elsewhere, it’s far cheaper now, making landfill gas projects a tough sell.

In addition, with federal subsidies for renewable energy set to expire at the end of this year, there’s political pressure to let them die. There are still state energy tax credits that make renewable energy competitive including landfill methane but primarily wind. But advocates for traditional natural gas and coal complain those tax credits artificially make electricity cheaper in Texas and are urging the Texas legislature to review the subsidies.

The EPA touched on some of the same points in its email to StateImpact Texas, saying the number of landfill gas projects in the state was limited by factors including low electricity prices, an abundance of wind projects that crowded out landfill gas for tax credits, and the fact that a good portion of the state is arid, which the EPA said can significantly reduce the ability of landfills to generate methane.