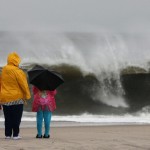 People stand on the beach watching the heavy surf caused by the approaching Hurricane Sandy, on October 28, 2012 in Cape May, New Jersey. Hurricane Sandy is expected to hit the New Jersey coastline sometime on Monday bringing heavy winds and floodwaters. 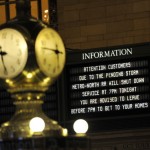 A sign on dispay in Grand Central Station in New York October 28, 2012 as the MTA has been began an orderly shutdown of commuter rail and subway service in preparation for Hurricane Sandy . 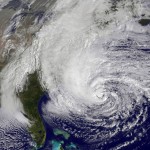 In this handout GOES satellite image provided by NASA, Hurricane Sandy, pictured at 1410 UTC, churns off the east coast on October 28, 2012 in the Atlantic Ocean. 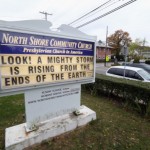 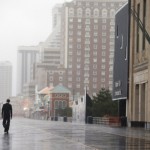 A man walks on the boardwalk ahead of Hurricane Sandy on October 28, 2012 in Atlantic City, New Jersey. Governor Chris Christie?s emergency declaration is shutting down the city?s casinos and 30,000 residents are being told to evacuate. ( 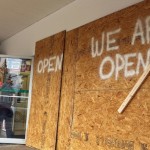 A boarded-up store remains open for business as the first signs of Hurricane Sandy approach on October 28, 2012 in Fairfield, Connecticut. The storm, which could affect tens of millions of people in the eastern third of the U.S., is expected to bring days of rain, high winds and possibly heavy snow in parts of Ohio and West Virginia. 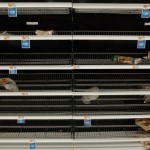 nly a few bread items remain on the shelves at the Waldbaums grocery store as Hurricane Sandy approaches on October 28, 2012 in Long Beach, New York. 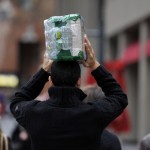 A man carrys a case of water down Lexington Avenue in midtown in New York October 28, 2012 as stores begin to close down in preparation for Hurricane Sandy . 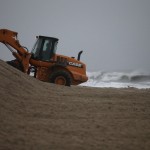 A loader makes a sand barrier on the beach to help stop storm surge from approaching hurricane Sandy, on October 28, 2012 in Cape May, New Jersey. Hurricane Sandy is expected to hit the New Jersey coastline sometime on Monday bringing heavy winds and floodwaters. 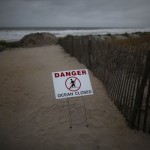 A sign reads “Danger Ocean Closed” at the entrance to the beach, due to approaching Hurricane Sandy, on October 28, 2012 in Ocean City, New Jersey.

As Hurricane Sandy cuts a path of destruction through the eastern states, many are wondering about the science behind this ‘Frankenstorm’ and whether it has any clear connection to global climate change.

In a piece titled ‘Frankenstorm: Has Climate Change Created a Monster?’, NPR’s Adam Frank notes that 2012 has been a banner year for weather anomalies: droughts, fires, floods, and extreme temperatures. But while some of those events can be tied to climate change, others cannot.

“There is a hierarchy of weather events which scientists feel they understand well enough for establishing climate change links,” Frank writes. “Global temperature rises and extreme heat rank high on that list, but Hurricanes rank low.” That being said, Frank write that warmer ocean temperatures do lead to more evaporation, “and that likely leads to storms with more and more dangerous rainfall of the kind we saw with Hurricane Irene last year.”

In situations like Sandy, climate scientists will often use an analogy: climate change is like putting expected extreme weather events on steroids. These scientists say that while it’s difficult to immediately attribute specific events to climate change (though not impossible, according to Frank), it is possible to say that many of these events are made worse by it.

Like the slugger that’s more apt to hit a home run out of the park while doping, but can still get one into the stands while clean, scientists say the changes that humans have inflicted on the climate are making extreme weather events more frequent and more intense.

“The way to think about it isn’t in terms of specific events, that this particular wildfire or this particular heat wave, was caused by climate change,” Mann told StateImpact Texas in an interview earlier this month. “But to look at what’s unfolding collectively.”

Climate change, Mann says, boils down to taking bad weather, and then increasing the odds. “Think of these individual weather events as the random rolls of a die, of a six-sided die,” Mann said. “What we are doing with climate change is we are loading those dice.” Mann noted that over the last decade, the U.S. has seen all-time heat records broken at twice the rate you would expect from chance alone.

And it’s getting worse.

And as Kate Sheppard notes in Mother Jones, whether or not Sandy is a direct result of climate change may be a moot point. Rising sea levels — something that’s been definitively linked to climate change — means that damage from storm surges like the ones from Sandy will be increasingly severe:

“In the US, we have 4,514 miles of shoreline—20 percent our total miles of coastline—that the National Oceanic and Atmospheric Administration says is highly vulnerable to sea level rise. That includes 82 percent of Virginia’s coast. You can see what that means for storm surges with this great map that Climate Central created. Jeff Masters, the director of meteorology at Weather Underground, says we can expect 3 to 6 foot storm surges where Sandy makes landfall.

Climate change is already speeding up sea-level rise. But it’s also making mega storms more likely. A warmer climate and more moisture in the atmosphere makes for more extreme storms, as Kevin Trenberth of the National Center for Atmospheric Research explains. As Masters put it, ‘I call it being on steroids kind of for the atmosphere.'”

The general uncertainty over Sandy’s link to global climate change is echoed by another lead science writer, Andy Revkin of the New York Times’ Dot Earth blog. “There remains far too much natural variability in the frequency and potency of rare and powerful storms — on time scales from decades to centuries – to go beyond pointing to this event being consistent with what’s projected on a human-heated planet,” Revkin writes.

This ambiguity may not be helpful if you’re trying use the storm as evidence that climate change is real, and affecting us now.

As NPR’s Adam Frank writes, hurricanes are not that type of canary in the coal mine:

“The science of climate attribution is very exciting and full of cool, new ideas. It has already provided us with first steps towards more precision in understanding how climate change is changing climate now, already. For hurricanes, however, sticking to the science means it is still hard to point to an individual storm and say, yes! Climate change! A more reasoned approach is to take the full weight of our understanding about the Earth and its systems and go beyond asking if any particular event is due to global warming or natural variability.”

But there have been numerous other events that scientists point to as being a result of (or exacerbated by) climate change, like the Texas drought of 2011. And a warming planet could mean that the impact of storms like Sandy will be more intense and damaging.

Update: Brad Plumer at the Washington Post has weighed in, saying that “the chaos caused by Hurricane Sandy does highlight at least one other major reason to worry about climate change: rising sea levels.” Read his report here.

And over at Scientific American, Mark Fischetti writes that “climate change amps up other basic factors that contribute to big storms. For example, the oceans have warmed, providing more energy for storms. And the Earth’s atmosphere has warmed, so it retains more moisture, which is drawn into storms and is then dumped on us. These changes contribute to all sorts of extreme weather.”