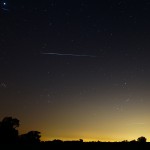 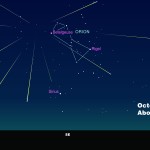 A diagram of the Orionid meteor shower. 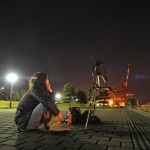 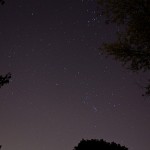 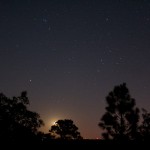 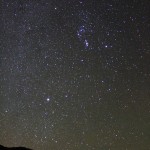 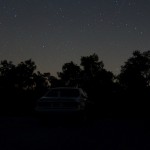 Stargazers are in for another treat this weekend. The Orionid meteor shower, an annual occurrence, will make its way across the sky late Saturday night into early Sunday morning.

The best hours to see the meteor shower will be at midnight Saturday until early Sunday morning, with a peak around 2 a.m. StarDate magazine says you can expect to see some 25 meteors per hour. And some of them may look “familiar” — the meteor shower is composed of leftover debris from Halley’s comet.

The sky watchers at StarDate, a publication of the University of Texas at Austin’s McDonald Observatory, recommend getting as far away from cities as possible to see the shower. “Look for state or city parks or other safe, dark sites,” they write. “Lie on a blanket or reclining chair to get a full-sky view. If you can see all of the stars in the Little Dipper, you have good dark-adapted vision.” The big, open skies of Texas — if you can get far enough away from city lights — should be perfect for witnessing the event should skies stay clear. No rain is forecast for much of the state for Saturday night into Sunday. And the moon is only at a quarter and will set before midnight, so it shouldn’t interfere with seeing the shower.

More on the astronomy behind the celestial wonder from StarDate:

“Orionid meteors appear to fall from above the star Betelgeuse, the bright orange star marking the shoulder of the constellation Orion. They are not associated with this star or constellation, but instead are leftover debris from Halley’s comet. The Orionid meteors recur each year when Earth passes through the comet’s debris trail.”