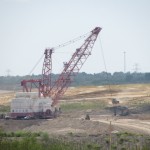 Giant shovels carve away acres of soil and rock, digging dozens of feet down to reach seams of lignite coal. This is the Big Brown Mine in Freestone County where so far some 14,000 acres have been excavated. 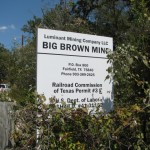 Big Brown was one of the first mines opened in East Texas in the 1970’s to fuel power plants. 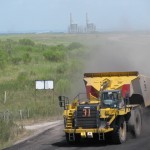 Coal haulers run 24/7/365, bringing tons of Texas lignite coal to the Big Brown Power Plant, owned by Luminant. The mine employs 250 people, the plant 150. Luminant said last year that it would have to shut down the mine and lay off workers if new pollution rules affecting coal-burning power plants were enforced. 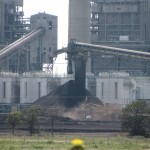 The EPA says older plants like Big Brown must cut their emissions of sulfur dioxide and other pollutants and that doing so would save hundreds of lives in Texas. But Luminant argued it didn’t have enough time to upgrade the plant with pollution control equipment. Last month, Texas won a ruling blocking the EPA from enforcing the “Cross-State Air Pollution Rule”. Luminant now says it will keep mining here. However, it will shutdown two other generating units for the winter at another plant in Titus County. Like Big Brown, that plant was built in the 1970’s. 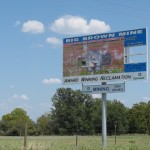 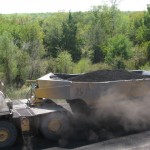 For the most part, Texas lignite coal is used only to fuel power plants located nearby. Because it burns with less intensity, it has less value than compared to higher quality coals from other states including Wyoming. And since more has to be burned, it produces more pollution. Power plants use a mix of out-of-state coal and Texas lignite in order to meet clean air rules. 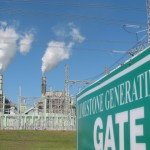 Located in Limestone and Leon Counties in East Texas, the Limestone power plant is owned by NRG. It was opened in the 1980’s. 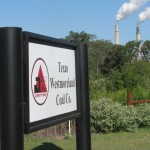 The Limestone power plant is fueled by the Jewett Coal Mine nearby which is owned by Colorado-based Westmoreland Coal Company. 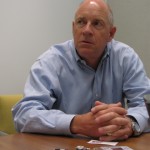 Gary Melcher with NRG manages the Limestone plant. He said the plant’s “scrubbers” remove enough of sulfur that had the new, stricter EPA rules taken effect, “We would have been able to meet that and continued operating the plant.” 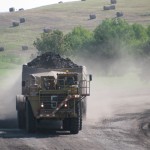 According to the city of Fairfield in Freestone County, coal mines and power plants are three out of the area’s four biggest employers (number two is a state prison). 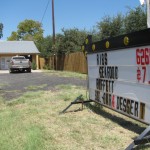 Anthony’s Restaurant in Jewett draws a lunch crowd from the mine and power plant. 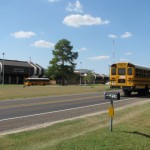 If coal becomes less competitive compared to natural gas or even wind and production drops or stops, the Fairfield school district could lose millions in taxes it currently receives from the Big Brown mine. 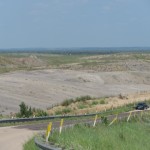 There are 15 coal mines in East and Central Texas, five in South Texas.

In East Texas, where unemployment rates in some counties are among the highest in the state, coal mining ranks as one of the biggest employers.

In the war between Austin and Washington over the U.S. Environmental Protection Agency’s efforts to put stricter limits on air pollution, some people in communties like Fairfield and Jewett worry what will happen if coal production drops…or stops.