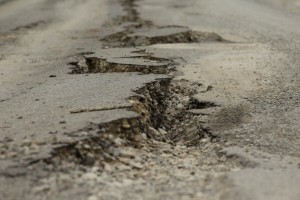 CHRISTCHURCH, NEW ZEALAND – FEBRUARY 26: A crack separates a road in the suburb of Avonside on February 26, 2011 in Christchurch, New Zealand. The death toll has risen to 145 and the hope for finding survivors is fading as rescuers search through debris for over 200 still missing following a 6.3 magnitude earthquake that struck Christchurch on Tuesday. The quake, which was an aftershock of a 7.1 magnitude quake that struck the South Island city on September 4, 2010, has seen damage and fatalities far exceeding those of the original. ()