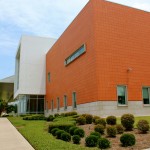 The ERCOT headquarters in Taylor, TX. StateImpact Texas was given a tour of the facilities on June 6, 2012. 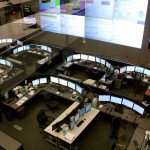 The ERCOT Grid Control Center at their headquarters in Taylor, TX. Controllers route electricity through over 40,000 circuit miles of high-voltage transmission wires. 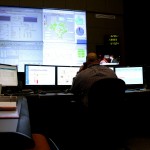 Inside the ERCOT Grid Control Center at their headquarters in Taylor, TX. Human controllers can override computers if power is at risk. 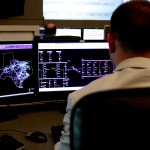 When generators fail, controllers lean on large electricity users, like factories, that are paid to be ready to shut everything off at a moment’s notice. 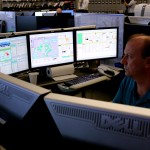 Controllers monitor supply and demand to keep them perfectly balanced. 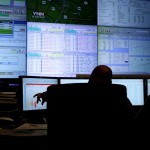 Controllers tweak the balance of supply and demand by activating backup generators. 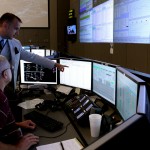 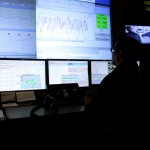 Controllers balance the need for power with the power given by their 550 generators in order to not waste resources. 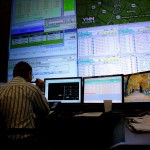 Controllers look at wind and solar energy, which can vary the access of gatherable resources. 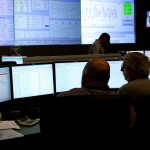 Controllers are in charge of monitoring every slight variation in power gathered, routed, and delivered to its 23 million consumers. 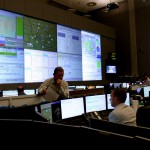 Controllers look at a distribution system so electricity can flow not just to consumers, but wherever it is needed most.


Imagine this: you’ve just gotten home from work. You worked right through lunch, as you often do, and now you just want to throw your pasta on the stove and relax in your air-conditioned home while you catch up with the news and… CLICK. Now your power’s out.

That frustration you just felt is exactly what the Electric Reliability Council of Texas (ERCOT), which manages the Texas Grid, is trying to prevent. However, it’s more complicated than just generating enough power for everyone.

StateImpact Texas got to see the ERCOT grid control center in person this week in order to get a better understanding of how blackouts are managed and limited. (You can see a slideshow of photos taken inside ERCOT above.) At the end of the day, it all comes down to a balance between load (demand for electricity) and generation of power.

“Generation and load have to match every moment of the day,” said Warren Lasher, Director of System Planning at ERCOT. “If they don’t match, the frequency of the grid will get too far away from 60 GHz.”

When the difference between the two is greater than .3 GHz (for instance, from a generator tripping offline), the load is instantly dropped, and certain neighborhoods will lose power. “They have a device called an ‘under-frequency relay’ that’s a prerequisite for them to be in our market,” said Paul Wattles, Senior Market Design Analyst. “If we lose that frequency because of a major unit tripping off line, they will drop that load instantly and restore that frequency, literally within one second. We like that, it’s a really good thing.”

During the time that it takes for a generator to come back online, ERCOT makes sure that the power outage ‘rolls’ throughout different neighborhoods so if say, power was lost for five hours, your house might only lose power for one hour. “They always try to rotate it through,” Wattles said, “so nobody has to sit there for the full five hours with no electricity.”

The burden of the power outages are borne mostly on residential areas. As Wattles explained, ERCOT keeps power on for facilities and customers with critical power needs, like hospitals.

Once operating reserves kick on, the operators at ERCOT’s control room calculate power line routes to make sure no line has too much power running through it. Once the route is calculated, the load that was dropped is picked back up and put back online, giving ERCOT a chance to fix whatever problem occurred with the disabled generator.

Robb Jacobson and Filipa Rodrigues are interns with KUT News and StateImpact Texas.