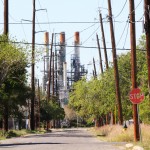 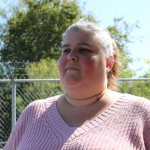 Tammy Foster is leading a group of residents trying to leave the neighborhood. 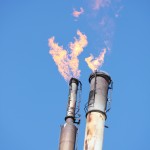 A flare erupts from a refinery stack in Corpus Christi 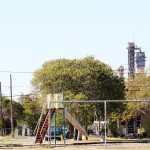 An Abandoned Playground in the Hillcrest Neighborhood 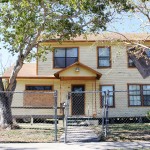 One of many boarded-up houses in the Hillcrest neighborhood, which sits next to the Citgo and Flint Hills refineries. 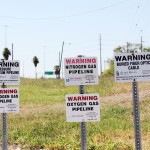 How do you get eminent domain in Texas? Just check a box. 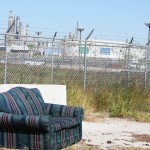 A sofa sits outside the Citgo East refinery in what was once the Oak Park Triangle neighborhood. 288 homes here were bought out by oil companies in the late nineties. 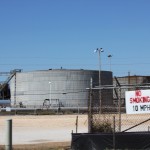 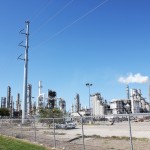 Tammy Foster is a lifetime resident of Refinery Row in Corpus Christi. After years of living surrounded by refineries and smoke stacks, she says many of the families there are sick. Now she’s leading a group of residents who think they’ve found a way to fix that.

Q: Tell me about the work you are doing with your health survey of going door to door and your results that you have with that.

A: I’ve only done like 25 or 30, and they’re pretty intense. Because you’re asking people everything that you can imagine. Some of that information I wouldn’t want to share with the general public. But people are doing it, they are answering the questions. They’re coming clean about miscarriages and birth defects, deaths in the family, all kinds of things.

Q: What’s your goal with those?

A: To prove to the TCEQ (the Texas Commission on Environmental Quality) that we have a cancer cluster and a birth defect cluster in this neighborhood.

Q: Once you do that, what’s the next step? Does the TCEQ or the EPA have to come in and act?

A: We are hoping they will do what they did in Blackwell, Oklahoma and force a buy out of the whole area. But that’s hope — it doesn’t mean that they will do anything. They can tell us we are crazy and ignore us.

The TCEQ doesn’t respond unless they are forced to. And as one of their employees put it, theyre nothing more than a janitorial service — the industry is here to pollute and they’re here to clean.

Q: What did you say back to him when you told him that?

A: I was just dumbfounded and I couldn’t believe that came out of his mouth.

Q: How does it feel to your personally? I mean, you’ve lived here almost your whole life and your mother lived here. You obviously have very strong ties to your neighbors and community.

A: I don’t have to be here. I choose to be here to help the neighborhood. I could have left years ago. I’m not leaving until everybody leaves.

Q: Which companies are you asking to buy you out?

A: I would say if they will all pitch in — there’s sixteen port industry companies here — they are all guilty of polluting us. I think they should all join together and make it a little easier on all of them. Theyre all complaining they are poor or they didn’t make any money when the recession hit, you know?

Well, if everybody pitches in a little bit, it shouldn’t cost them that much. We estimated, we kinda did a rough figure. If they were to come in here and buy every house from Academy Heights to Hillcrest, that’s a thousand homes, it would cost them 100 million dollars maybe.

And that’s on the high end. Nobody’s asking for 200,000 dollars for houses. They’re asking for the tax value, and some money to move on so they can get to where they need to go.