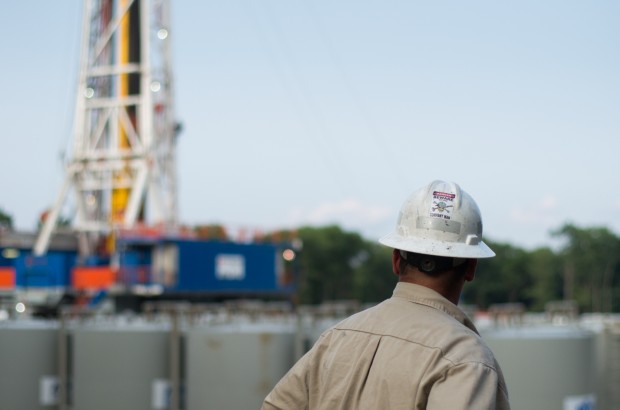 Pennsylvania's Marcellus Shale industry has been struggling in the face of low commodity prices.

The sound of humming drill rigs has been tapering off lately. It’s been happening for a while, but this year, the industry is going through a particularly rough patch. Drillers are laying off workers and cutting spending in the face of low natural gas prices.


One prime example is Cabot Oil and Gas. Earlier this month, the company announced plans to cut its 2016 capital budget by 58 percent, compared to last year. It’s also scaling back to operate just one rig. That’s a pretty big deal, according to Stephen Beck, who analyzes U.S. oil and gas plays for IHS.
“The noteworthy thing about Cabot is that it’s located in some of the best areas of the Marcellus in Northeast Pennsylvania,” he says. “The wells in these areas are some of the most economic wells in the Marcellus.”
Other major companies have also announced cuts this year. Southwestern Energy laid off over nearly 40 percent workforce—including about 200 jobs in Appalachia. Range Resources recently cut 55 jobs and Chesapeake Energy saw its stock plummet as it fended off bankruptcy rumors after hiring a restructuring firm.
The downturn has rippled through related industries too. Clayton Bubeck is with the Lancaster-based engineering firm, Rettew. He says the Marcellus boom was a shot in the arm just at the right time in 2008. Despite the Great Recession, Rettew was able to open new offices and their workforce more than doubled to nearly 500 people.
But suddenly, nearly all their business was oil and gas.
“We really didn’t understand what that cyclical nature was going to be maybe as well as we should have,” says Bubeck.
In 2014 Rettew decided it needed to diversify in order to insulate itself from the booms and busts of the industry. Today, the company has just under 400 employees and does about half its business in the energy sector overall—including some growing renewable industries.
“That’s just the way oil and gas is. It’s a commodity-based industry. It’s capitalism. When they’re making money, they’re doing work,” says Bubeck. “And when the prices are down, they retract. They do it to themselves. They knew the more they drilled, the more product they’d put on the market, and that drove the price down.”
Marcellus gas production peaked last year then started to slide. There are now just 19 rigs running in Pennsylvania.
“It’s really difficult for them to justify keeping all the rigs out there,” says Lynn Westfall, director of the Office of Energy Markets and Financial Analysis for the U.S Energy Information Administration.
Since production declines rapidly from wells, companies have to keep drilling new ones to keep up the pace.
“That’s why production is going down,” says Westfall. “The new wells aren’t making up for the loss from the old wells. The other problem is logistics. There’s just not enough pipeline capacity to get it out.”
And less gas means less work. The most recent figures from the state Department of Labor from the second quarter of 2015 show a loss of more than 2,262 oil and gas jobs, compared to the same period the previous year.
The slump is also hurting state coffers. Royalties from drilling on Pennsylvania forest land have dropped sharply this year, and gas companies will pay less in impact fees—which have become an important source of revenue for local governments.
But as an analyst watching this all play out, Beck says it’s key to remember one thing.
“The important thing is the industry does go through these boom and bust cycles as everyone knows and the industry will get through this low price period as well.”
Governor Tom Wolf is still advocating for a new severance tax on production. Last year, his proposal didn’t get enough legislative support. This year, his administration expects his new plan would bring in $217.8 million dollars—a fraction of the billion dollars they’d hoped for last year. Republican lawmakers, who have long opposed such a levy, are starting to signal they may be open to enacting one this time around.