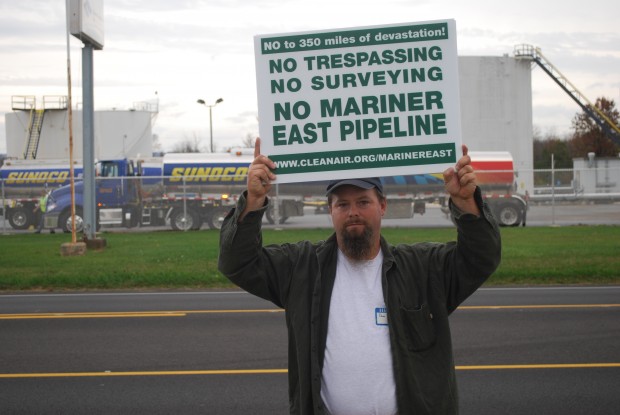 A judge's ruling allows opponents of the Mariner East 2 pipeline to argue their case in court.

A Philadelphia judge ruled that a legal challenge to Sunoco Logistics’ use of eminent domain for construction of its Mariner East 2 pipeline can go ahead despite the company’s call for the court to dismiss the case.
Judge Linda Carpenter of the city’s Court of Common Pleas, in a decision published on Wednesday, sided with the environmental group Clean Air Council and two other plaintiffs who sued Sunoco last year. They argued that the company is not entitled to seize private land through eminent domain for the pipeline because it is not legitimately operating as a public utility in Pennsylvania.
The plaintiffs say that because the pipeline would carry natural gas liquids from Ohio and West Virginia through Pennsylvania, and that most of the liquids would be sold overseas, the pipeline is predominantly an interstate – not intrastate — entity, and so should not be given public utility status that would allow the company to assert eminent domain.
Judge Carpenter agreed with the plaintiffs on the nature of Sunoco’s operation, saying their arguments “amply support a finding that Sunoco’s Mariner East 2 project is engaged in interstate commerce.”
She argued that the company itself has stated that it would operate the pipeline across state lines, and said that its plans to sell NGLs overseas are “highly contrary” to the existing Mariner 1 pipeline which carries the liquids within the Commonwealth, making the public the “primary beneficiary” of the product.
The judge rejected an argument by Sunoco that the plaintiffs don’t have standing to bring the case before the court, saying that two of them live in a property in Media, PA that would be subject to air pollution, noise and a “permanent alteration of aesthetics” by the pipeline.
“This court has determined that they have a substantial, direct and immediate interest in enjoining the Mariner East 2 pipeline project, and thus have proper standing,” the judge wrote.
And she dismissed the company’s claim that the Pennsylvania Public Utility Commission, not the court, should hear the case.
“The Public Utility Commission does not have exclusive jurisdiction over the issues presented here,” the judge wrote in a 12-page opinion.
Nils Hagen-Frederiksen, a spokesman for the PUC, said the regulator does not expect the ruling to affect its jurisdiction over intrastate pipeline operations. He noted that the judge was ruling on the preliminary objections, not on the full case brought by the plaintiffs.
Sunoco issued a brief statement saying that the ruling was restricted to the issues of standing and jurisdiction, and did not address the merits.
“There has been no decision on the merits in the case,” said company spokesman Jeff Shields, in a statement.” Judge Carpenter ruled that the Philadelphia Court of Common Pleas has jurisdiction but also certified the issues for appeal, recognizing that these are questions that are likely to be decided by a higher court.”
While the company argued that the judge was not ruling on the merits of the case, Clean Air Council said the decision raises new questions about whether Sunoco could use eminent domain to obtain land for the pipeline.
“While Sunoco has been asserting to landowners along the proposed Mariner East route that it has the right to use eminent domain to build the projects through their properties, this decision makes very clear that Sunoco’s right of eminent domain is not nearly so well established as it has been trying to convince citizens it is,” the nonprofit said.
Alex Bomstein, an attorney for the environmental group, said the ruling on standing could be interpreted to mean that pipeline opponents have a right to take legal action against a project even if their own property would not be directly built on. If so, the ruling could have an effect beyond the Mariner East 2 project, he said.
Opponents of the 350-mile pipeline plan include Elise Gerhart, whose mother, Ellen Gerhart, has been fighting Sunoco’s plan to build the pipeline on her 27-acre property in Huntingdon County.
Elise Gerhart welcomed Judge Carpenter’s ruling as a “thoughtful opinion” that goes against those of some other Pennsylvania judges who have recently upheld Sunoco’s right to assert eminent domain.
But Elise Gerhart said the latest opinion may be too late for her mother, who is awaiting tree-clearance on her land after losing her own case against Sunoco in a county court.
“Had we had this ruling to use as precedent in court, we may not be in the same situation we are in now, waiting for tree-clearing crews to come in any day,” she said.
Michael Faherty, an attorney who represents about 60 land owners who are fighting eminent domain cases, called the ruling “a wonderful decision” that represents a setback for Sunoco’s efforts to assert eminent domain.
Faherty said the ruling differs from that of other county judges by looking in detail at the issue of interstate commerce, and may become a template for future litigation on the issue.
“Judge Carpenter’s analysis of long established interstate commerce law may provide strong guidance for trial judges and appeal judges as property rights in Pennsylvania are under review,” Faherty said.
After a number of rulings by county judges, most of which have backed Sunoco’s use of eminent domain, the latest decision is expected to set a statewide standard on the issue, said Michael Bomstein, another plaintiff and the father of Alex Bomstein.
“By refusing to dismiss our suit and certifying the matter for appeal at this stage, the court now has set the stage for a statewide ruling on whether Sunoco can continue to get away with using eminent domain for private profit at the expense of the environment and the citizens of the Commonwealth,” Michael Bomstein said.
The judge certified the case for appeal to the state Superior Court, where it is now expected to be argued.
This story has been updated with comments from the landowner’s attorney. It has also been updated to reflect the name of Elise Gerhart; an earlier version referred to her as Elise Alcyone, which is her middle name.