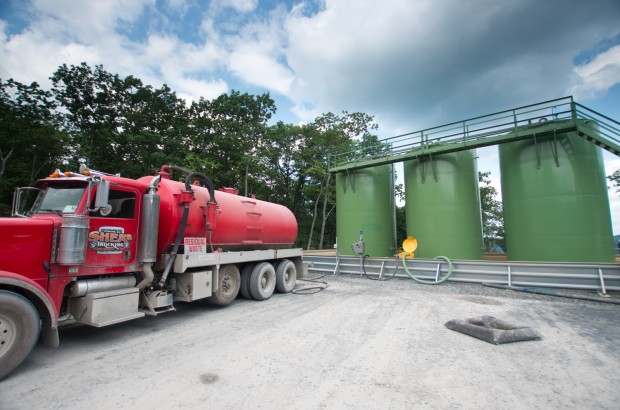 Pennsylvania is getting a lot less royalty money from Marcellus Shale drilling on state forest land this year due to the low price of natural gas, according to a new analysis from the state’s Independent Fiscal Office.
“We’re seeing a large drop off, year-over-year, in the royalty payments,” says IFO director Matthew Knittel. “For the first six months of this fiscal year, royalty payments are about $31 million. That’s down 52 percent from the same six-month period last year.”
The IFO predicts royalty revenue will continue to decline in the near-term but gradually recover as companies add more pipeline capacity to deliver gas to new markets. The IFO is charged with providing nonpartisan budgetary analysis to the state.
“Some of the pipelines are coming online even now,” says Knittel. “And a few more are scheduled in 2016 and 2017 and we do think that will relieve the conditions and allow for a price appreciation.”
The royalty money goes into Pennsylvania’s Oil and Gas Lease Fund. In recent years, the state Department of Conservation and Natural Resources (DCNR), which manages drilling in public forests, has relied heavily on the fund to support its general operating expenses. At the end of 2015, there were 646 Marcellus Shale wells capable of producing royalties in state forest land.
“It does introduce volatility to the DCNR budget,” says Knittel. “We’re seeing this play out in other states that rely heavily on severance taxes such as Alaska, North Dakota, and Texas. They’re also having a lot of volatility in their budgets this year.”
In 2015 leases on nearly 40,000 acres of state forest land were terminated for failing to meet the terms of the contracts. According to DCNR, in most cases gas companies were unable to drill a well within the initial five-year time frame required in the lease, and had no plans to drill additional wells in the near future due to low prices.