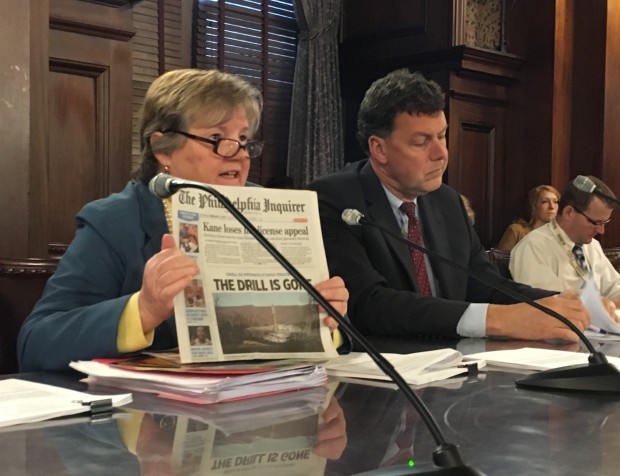 State Rep. Kate Harper (R- Montgomery) holds up a copy of the Philadelphia Inquirer with a story about the downturn in drilling.

A day before Governor Tom Wolf is expected to unveil another attempt at taxing Marcellus Shale drillers, House Republicans were discussing their own proposals.
The House Environmental Resources and Energy Committee held an informational meeting Monday to look at two Republican-backed severance tax bills. Rep. John Maher (R- Allegheny) chairs the committee. He says he wants to make sure any new tax won’t hurt the state’s business climate.
“This industry that was once in a boom, is now in a bust,” he says. “And ultimately, we need to have a safe environment, but we need to be the best place for the drilling and production of natural gas.”
One of Wolf’s central campaign pledges in the race for governor involved enacting a Marcellus Shale tax, but he was unsuccessful in getting one last year during protracted budget negotiations with the legislature. He is expected to renew the effort in his second budget address Tuesday.
Rep. Kate Harper (R-Montgomery) has one measure that would levy a 3.5 percent tax on Marcellus drillers, while keeping the current gas well impact fee in place.
“I believe that any budget discussion at this time must include a discussion of the severance tax,” she says. “I believe most Pennsylvanians understand this, and are prepared for it, as are the energy companies.”
When asked whether her plan would make the state less competitive, Harper said it wouldn’t.
“One reason we’re not Texas is that we’re the Keystone state. We are located next to great markets” says Harper. “Up and down the East Coast and into New England, they need fuel for heating, and other things, and manufacturing.”
Rep. Greg Vitali (D- Delaware) serves as minority chair of the committee and thought the hearing was long overdue.
“Ironically, I remember Tom Wolf sitting at that very table, as Governor Rendell’s Revenue Secretary and my asking him about the tax,” he says. “It’s a sad commentary on the influence of money in politics in this commonwealth that we don’t have a severance tax.”