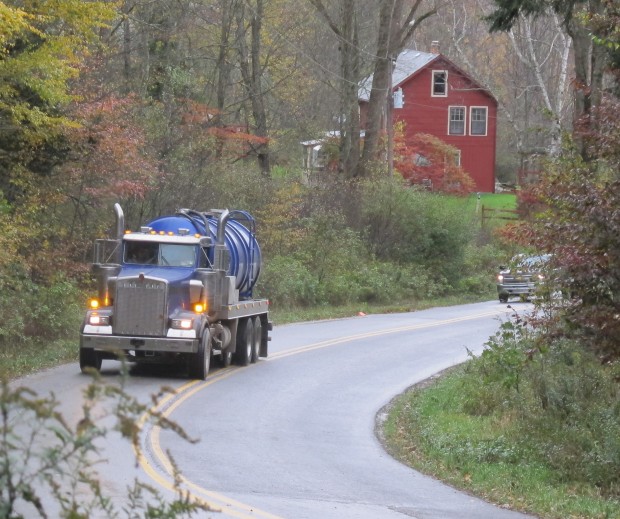 A fracking waste water truck runs along a backroad in Northeast Pa. The impact fee has helped fund repairs to rural roads damaged by drilling related truck traffic. But the drilling and the traffic slowed down in 2015, leading to reduced payments.

Pennsylvania’s local authorities will lose millions of dollars in fees from the natural gas industry this year because of lower gas prices in 2015.
The Public Utility Commission announced on Jan. 30 that mostly because of the sharp fall in gas prices, it would be reducing the amounts paid to municipalities and counties from impact fees charged to operators under Act 13, Pennsylvania’s wide-ranging gas industry law.
The fee paid for an unconventional well in its first year will be reduced by $5,000, or about 10 percent, to $45,300, the PUC said. It noted that the average price of natural gas at the Henry Hub dropped to $2.66 per million BTUs in 2015 from $4.37 in 2014.
The lower payments, which also reflect a decline in the Consumer Price Index, will reflect a sharp reduction in the number of wells begun, or “spud” – from 1,372 in 2014 to 785 last year. The new fees are for 2015, payable in 2016.
The impact fee is designed mostly to compensate local authorities for impacts such as heavy truck traffic in areas where the industry is active, but also provides money for environmental improvements in counties outside the Marcellus and Utica Shales.
Since it was implemented in 2012, the fee has raised about $854 million, and has become an important source of revenue for counties that are using it to make environmental investments without having to put an additional tax burden on property owners.
Consequently, counties want to see the fee maintained even if state lawmakers agree to impose a severance tax on gas production, as proposed by Gov. Tom Wolf, according to the County Commissioners Association of Pennsylvania.
“Maintaining the shale gas impact fee, with all distributions as currently structured, remains one of counties’ top priorities regardless of any discussion of proposals to place a severance tax on the natural gas industry,” the association said, in a list of county government priorities for 2016.
Still, many counties have taken a conservative attitude to the impact fee funds because of the energy industry’s history of boom and bust, and many have avoided using it for operating expenses, said Lisa Schaefer, the association’s director of government relations.
“Many counties have put the money away in capital reserves,” she said. “Our counties knew that this was going to happen at some stage.”
Schaefer said counties in shale gas areas have received about $160 million, or about $40 million a year, since the fee was implemented. Across all of Pennsylvania’s 67 counties, the fee has generated about $46 million for open space and some $77 million for improvements to at-risk bridges, she said.
Harlan Shober, one of three commissioners in heavily drilled Washington County, said he did not know how much less money the county would get this year as a result of the PUC’s action but, with a 10 percent cut, assumed it would be about $600,000, based on the $6.1 million that the county received in 2015.
Like many other counties and municipalities, Washington County does not use impact fee money for its operating budget but dedicates it to capital projects, Shober said.
“That money was not part of our normal budgeting, so that’s why we tell everybody, ‘Don’t spend the money until you get it,’” Shober said. “When the money comes in from Act 13, then you can make your decisions on where to spend it.”
He predicted that impact-fee revenue will rebound in coming years when more pipelines are built to improve Pennsylvania’s ability to sell its gas around the country and around the world. “The gas price will come back, and each of these communities where they are drilling will grow with it,” Shober said.
The Washington County township of Chartiers has received about $600,000 in impact fee money for each of the last two years, and has used the money to help pay for projects such as road improvements, new sewer lines and the purchase of power generators, said Jody Noble, township manager.
Noble said she does not expect to know the precise size of the latest revenue cut for several months, but said a reduction in the impact fee is no surprise given the low price of natural gas.
“It’s something that we anticipated given the price of gas and we budgeted accordingly,” she said, noting that the township planned for about $100,000 less in its capital budget this year because of the low gas prices.
All Act 13 money goes toward capital projects “so all it means is maybe we have to postpone some of the capital projects,” she said.
With 68 wells in a township populated by some 8,000 people, Chartiers has become accustomed to the revenue, which has been effective in its aims of easing the impact of drilling on the local community, Noble said.