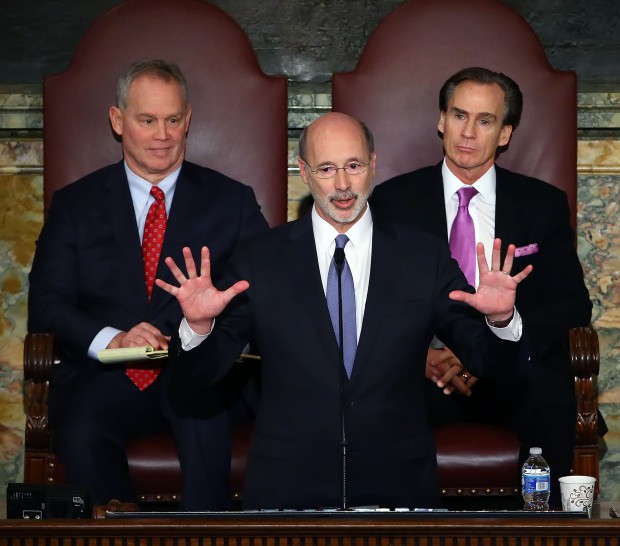 Gov. Tom Wolf, center, delivers his budget address for the 2016-17 fiscal year to a joint session of the Pennsylvania House and Senate, as the speaker of the state House of Representatives, state Rep. Mike Turzai, R-Allegheny, left, and Lt. Gov. Mike Stack, right, listen at the State Capitol in Harrisburg Pa., Tuesday Feb. 9, 2016.

Governor Wolf wants the state’s natural gas drillers to pay a 6.5 percent tax on Marcellus Shale production, which he estimates will bring in $217.8 million dollars for fiscal year 2016/2017 to the general fund. It’s a bold move for a governor who failed to get anywhere last year with the lower 5 percent extraction tax proposal.
In his budget address, Wolf focused on the current stalled budget process and did not even mention taxing natural gas drillers, or discuss any details about his proposed budget. He struck a defiant tone toward Republicans who may continue to oppose any tax hikes.
“Indeed anyone in this Chamber who claims we can simply cut our way out of this mess without also increasing revenue is just ignoring the math,” said Wolf. 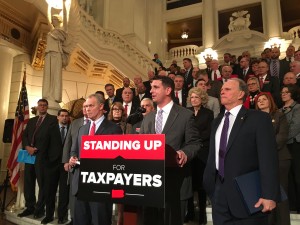 But industry leaders say Wolf is ignoring market realities. Production has tanked across the state as the price of natural gas reaches new lows. An indication of just how much drilling has slowed in the state is revealed by the $217.8 million revenue expected from the 6.5 percent tax during the initial fiscal year. That’s roughly what the state has taken in each year through the per-well impact fee currently levied on drillers. And it’s much lower than Wolf’s initial 2015 budget proposal, which projected $1 billion in revenue from the five percent severance tax proposal.
House Majority Leader Dave Reed, R-Indiana, says the revenues from a 6.5 percent tax won’t come close to balancing the budget.
“The bottom line is it doesn’t bring in any money because natural gas prices are at record lows,” Reed told reporters after the budget address. “We went from a situation last year where the governor proposed a billion dollar severance tax to fund education,… by the end of last year even he admitted his severance tax proposal [would have] only brought in $50 million dollars.”
Pennsylvania now charges a per-well “impact fee” on natural gas drillers, which has been reduced this year because of low gas prices. In the past the impact fee raised an average of $225 million a year, most of which went to local communities impacted by drilling. In this proposal, impact fee funds for gas drilling areas would remain intact, but instead of a per-well fee the money would come out of the 6.5 percent tax. That revenue is estimated at $133.1 million, and is in addition to the $217.8 million expected for the general fund. Total projected revenue generated from a 6.5 percent shale gas tax would be $350.9 million for FY 2016/2017. These estimates  jump each year, reaching $507 million for the general fund by 2020/21.
Erica Clayton Wright, spokeswoman for the Marcellus Shale Coalition, an industry group, says it’s the worst possible time to consider taxing the industry.
“We already are seeing significant reductions in capital expenditures and job losses,” said Wright. “This is not the time to add additional taxes.”
Wright says the natural gas tax will hurt average Pennsylvanians.
Pennsylvania remains the only state not to impose an extraction tax on natural gas. Wolf’s proposal would have drillers start start paying the levy July 1.