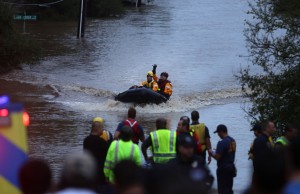 For years, they’ve been giving Texas bad grades for what they say is far too little spending on projects to reduce flood damage like channels, detention ponds, and levees. The Texas Water Development Board estimates there are nearly $14 billion dollars in such projects needed statewide.

Maybe that’s one reason Texas was once ranked number one in the nation for highest flood damage claims and in recent years has been surpassed only by Louisiana.

Civil engineer Beitel says studies have found that one of the most effective ways to reduce flood damage are building codes requiring that new structures be at least a couple feet above the expected flood level.

Houston’s code is now one foot.

“And we know that now. I really wish we’d known that a hundred years ago,” Beitel said.