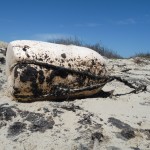 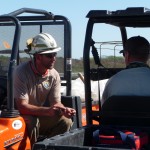 Workers use ATVs, tractors and large dump trucks on the island’s beaches to clean up the spill. 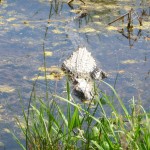 The island is a wildlife refuge for migratory birds and several endangered species. It’s also home to alligators like this one. 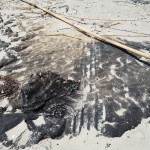 Tons of oil have been cleaned up from the island’s beaches. 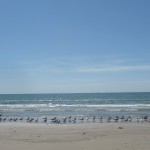 The island is an important stop for migratory birds. 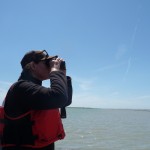 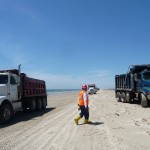 The attempts to clean up the spill are having an environmental impact of their own. 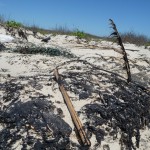 Within days of the spill, the spread of the bunker fuel was apparent. Oil was detected 12 miles offshore into the Gulf of Mexico on Sunday, March 23, and globs of tar and oil were seen along Texas City shores and beaches in the area. 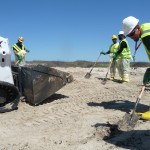 Cleanup efforts are being organized by the U.S. Coast Guard and the Texas Parks and Wildlife Department, and officials say they are at least several weeks away from fully containing the fuel.

Weeks after a large oil spill in Galveston Bay, it’s still having an impact on sensitive wildlife habitats along the Texas Gulf Coast. On Wednesday, the U.S. Fish and Wildlife Service took reporters to see the impacts on Matagorda Island, an important wildlife refuge for migratory birds and several endangered species. Workers are now busy cleaning up tons of oil from the Island’s beaches.

Mose Buchele took the photos above of the spill’s impact on Matagorda Island. Check back tomorrow for his story on how the cleanup effort istelf could disturb the delicate ecosystem and endangered wildlife of the Gulf Coast.