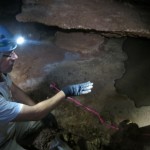 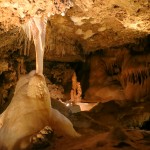 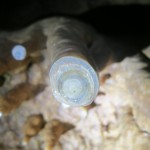 Scientists study the make up of stalactites and stalagmites to learn about ancient climate trends. 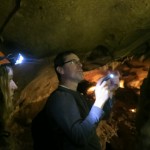 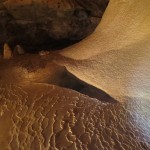 This mirror like pool of water was dry during the great Texas drought of 2011. 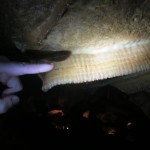 Formations like these tell the story of the earths climate history. 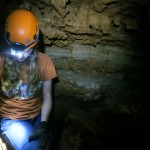 Barbara Wortham recently presented new research on how to determine the age of speleothems.. 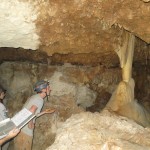 Dr. Banner’s research team measures the length of time for a single drop of water to fall in this cave. 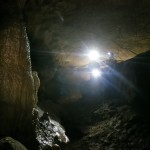 Dr. Jay Banner and Barbara Wortham in a part of the caverns closed to the public. 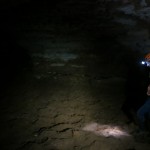 Barbara Wortham at the lowest part of the caves. 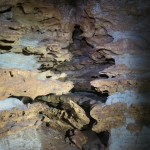 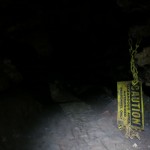 Researchers venture off the public passages to learn carry out their work.

It’s easy to imagine that attitudes towards climate change would be different if everyone owned a device like the one Dr. Jay Banner showed me this winter in Georgetown, Texas. It’s a small instrument, about the size and shape of a walkie talkie, that measures carbon dioxide wherever you go.

“You can see that outside here, the levels of carbon dioxide in the atmosphere is 403 parts per million,” Banner says, holding it up for inspection on a frigid morning. “That’s a number we’re really worried about in our society today. Because, at the onset of the industrial revolution, we were at about 280 parts per million. We’re on our way towards doubling it.”

Scientists agree that carbon dioxide contributes to climate change. What researchers like Banner, a Professor of Geological Science at the University of Texas at Austin, want to understand is what climate change means for the world around us. That search has put him in some tight spots during his career, often deep underground, in the caves of Central Texas. We met in Georgetown to take a tour of the Inner Space caverns off of I-35, where Banner and his team conduct some of their research. We explored the public passages, and those tighter tunnels looking at those other-worldly seeming mineral formations that hang from the roofs of caves or reach up from the floor. Scientists call them speleothems, through you might know them as stalactites and stalagmites.

“So we’re coming to a bunch of stalactites here,” Banner says as we reach one spiky outcropping.  “Now what we can see is that they’ve been broken off. That’s unfortunate. But one thing you can see as they’ve been broken is the concentric growth. They almost look like rings of a tree where the oldest rings are on the inside and the youngest are towards the outside.”

Those rings are formed by the slow drip of water depositing the mineral calcite. And they hold secrets to what weather conditions were like in the distant past. Scientists refer to them as “Paleo” rain gauges. Scientists study the make up of speleothems, like stalactites and stalagmites, to learn about ancient climate trends.

“Our dating results indicate that water had to have been dripping from some of the same drip sites for 70,000 years,” says Banner. “It’s remarkable when you think about that.”

The idea behind researching speleothems is simple: the better science can understand the climate of the past, the better we’ll understand what may be in store. But there’s still a lot to learn about how to read these rain gauges.

But if you look at enough of these formations in enough caves, across a large enough region, a picture begins to emerge.

Banner says research in caves like these have shown the gradual disappearance of topsoil over the Edwards plateau. It’s also shown how trends during the earth’s last major warming period may not match what scientists expect this time around.

At the end of the last ice age, about fourteen thousand years ago, the earth underwent its last major warming. That warming melted the great ice sheets that covered much of North America.

“During this melting event and warming event, we had this increased flux of atmospheric moisture from the Gulf of Mexico into the Southwest U.S.,” said Banner. “The projection for the 21st century is that instead of projecting this to be a wetter place, its projected to be a drier place. And so the droughts of the 1950s are sort of projected to be the new norm.”

If that does come to pass, future generations could study our warming age the same way we’re currently studying the past: in the slowing drips of water filtering into hidden spaces below our feet.