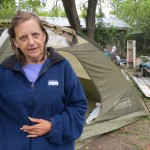 Debbie Lonzano slept in a tent in her yard surrounded by possessions she hoped she could salvage. 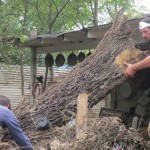 Volunteers clear dead trees that were pushed onto property by flood waters. 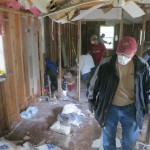 The Home where Lozano lived with her boyfriend will most likely have to be destroyed said volunteers. 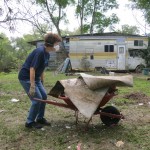 A volunteer in Bluff Springs. 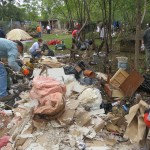 Volunteers clear a pile of debris from yard. 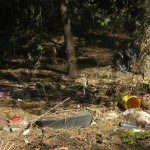 The creek clogged with debris, including dead animals. 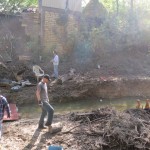 Volunteers mobilize at a nearby church. 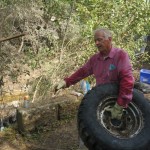 Volunteers hope to clear the creek one load at a time. 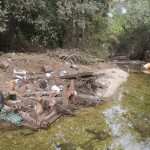 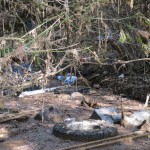 Animals rot in the water. 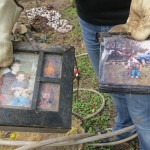 Photo albums found in the debris. 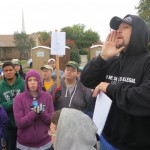 After the floods on Halloween morning destroyed their home in Bluff Springs, a community just across the Austin city line in unincorporated Travis County, Debbie Lozano and her boyfriend slept in a tent in their yard.

“We got this creek right here, Boggy Creek, and then it runs in the back of the property into Onion Creek. So we got it double wammied!” she says, remembering a frantic escape in the night, the water rising to her chest.

They had no transportation, and didn’t want to leave their dogs behind. So when the flood receded they lit a campfire to stay warm, and began hauling their waterlogged possessions, what they could salvage, into the yard to dry.

Saturday, nine days after the flooding, volunteers arrived to rip out sheet rock and insulation from the house, clear debris and saw apart trees the waters had pushed against the property. Lozano said it was the first time anyone had come to help clean. She called the assistance a “miracle.”

“You know, we were out here all by ourselves. Nobody was trying to help and it was just him and I, so it felt like we were literally on a desert island,” says Lonzano.

But the broken houses and piles of trash were just a small part of the devastation.

“You outta see down there,” says Lozano’s boyfriend Richard Neilson, gesturing to the back of the property. “You outta see how it looks down there. It’s like a bomb went off! I mean there’s so much trash. People’s doors, windows, barrels, trash everywhere. It’s unbelievable!” Down in Onion Creek, volunteers stood in a line passing debris up an embankment and into wheelbarrows. It was treacherous work that required balancing on unsteady piles of rubble.

Parts of the creek were piled high with refuse. There were television sets, picket fences, an overturned billiards table, a surprising number of tires — basically anything you could think of.

“I found a photo box with a bunch of different photos,” says volunteer Michele Feria. “A picture of a father and his son … I definitely want to save these and see if I can find the owners. These are the things you can’t replace, right?”

But there was one kind of refuse they were told not to touch: dead animals.

Among them: a dead horse, dog, goat, and deer, all rotting in the creek bed, sometimes in the still-flowing water. A horse that perished in the flood.

“There’s a horse over there, a goat over here, and then further up there, it looks like a deer, but it could be a dog” says Lina Meaux, another volunteer. “The homeowner says he thinks it’s a dog, and that the city was called and that they were supposed to pick it up the next day, and they still havn’t been out there.”

“Hopefully they’ll come and take care of this for them, because its not good living conditions for them by any means,” Meaux adds.

The horse looked as though it had been tied by its leg to a tree. When the waters came, it didn’t have a chance. There were other things decaying under the debris that would remain unidentified. You could smell them, but not see them.

Back at the staging area where the Austin Disaster Relief Network was organizing volunteers, Executive Director Daniel Geraci is told about the horse. A photo album found in the debris.

“That is a health risk, so I’m calling animal control to see if I can get those guys out there,” Geraci says.

He believes the city and county lost valuable time immediately following the flood by not getting disaster assessment teams out in the field. He said it was as though nobody understood how bad things were, and that meant volunteer help was a long time in coming.

“So the word wasn’t really out there until probably the fifth or sixth day. And that’s when we start beginning to see a little bit more volunteers trickle in.”

There will need for volunteers well into the future as the cleanup turns to rebuilding, according to the Austin Disaster Relief Network.