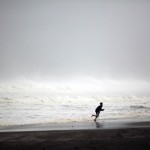 A young boy runs along Rockaway Beach as Hurricane Sandy begins to affect the area on October 29, 2012 in the Queens borough of New York City. 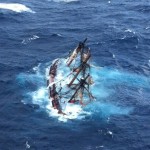 In this handout image supplied by the US Coast Guard, The HMS Bounty, a 180-foot sailboat, is submerged in the Atlantic Ocean during Hurricane Sandy approximately 90 miles southeast of Hatteras, North Carolina, on October 29, 2012. Of the 16-person crew, the Coast Guard rescued 14, recovered a woman who was later pronounced dead and are searching for the captain. The HMS Bounty was built for the 1962 film Mutiny On The Bounty and was also used in Pirates Of The Caribbean. 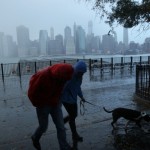 A couple walks in the rain as a darkened Manhattan is viewed after much of the city lost electricity due to the affects of Hurricane Sandy on October 30, 2012 in New York, United States. 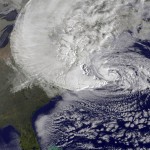 In this handout GOES satellite image provided by NASA, Hurricane Sandy, pictured at 1240 UTC, churns off the east coast on October 29, 2012 in the Atlantic Ocean. 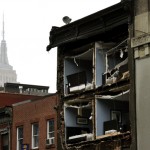 The Empire State Building towers in the background of an apartment buliding in Chelsea, New York City, with the facade broken off October 30, 2012 the morning after Hurricane Sandy. 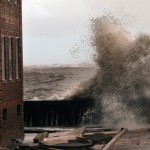 Waves break next to an apartment building which flooded from Hurricane Sandy on October 30, 2012 in Atlantic City, New Jersey. 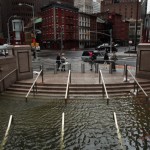 Water floods the Plaza Shops in the wake of Hurricane Sandy, on October 30, 2012 in Manhattan, New York. 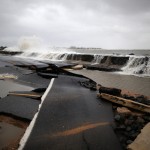 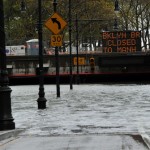 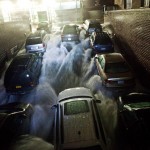 Rising water, caused by Hurricane Sandy, rushes into a subterranian parking garage on October 29, 2012, in the Financial District of New York, United States. 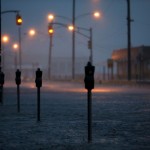 Ocean Avenue is flooded caused by Hurricane Sandy, on October 29, 2012 in Cape May, The New Jersey coastline is feeling the full force of Sandy’s heavy winds and record floodwaters. 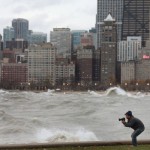 A photographer shoots waves generated from the remnants Hurricane Sandy as they crash into the shoreline of Lake Michigan on October 30, 2012 in Chicago, Illinois. Waves up to 25 feet high generated by winds up to 50 miles-per-hour were expected on the lake. 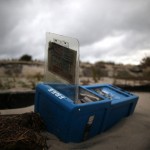 Some six million people were without power this morning because of Hurricane Sandy, and at least 33 are dead, many of them killed by falling trees. Travel and transportation has largely come to a standstill in many areas of the Northeast. In the photos above, you can see the impact of one of the most destructive storms in the area’s history.

And while the storm’s physical damage is limited to the East, that doesn’t mean it hasn’t been felt here in Texas. Many flights have been canceled at Texas airports. And several Texas utilities are sending staff East to help restore power in areas affected by Sandy.

Some thirty tree-trimming and eight distribution contractors from Austin Energy are headed Northeast to help, as are crews from Entergy, Oncor, and CenterPoint. AEP Texas is sending 81 employees to West Virginia to help AEP crews there restore power, and has released an additional 38 contact crews to help as well. And San Antonio’s CPS energy has a convoy of some 50 workers headed out to assist in restoring power in the Northeast.

Videos, after the jump: