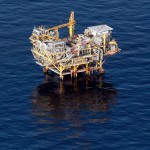 The Deepwater Horizon rig seen before the explosion. 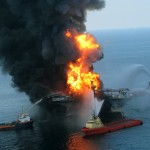 Multiple Coast Guard helicopters, planes and cutters responded to rescue the Deepwater Horizon 126 person crew after an explosion and fire caused the crew to evacuate. 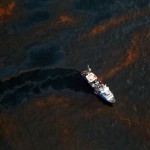 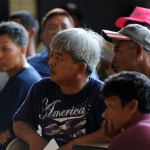 Local fisherman who signed on to help with the oil clean-up operation on May 1, 2010. 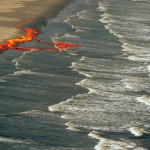 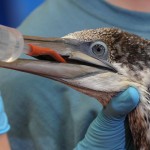 Rescue crews hydrate a Northern Gannet bird that was covered in oil on May 1, 2010. A giant oil slick threatened economic and environmental devastation as it closed in on Louisiana’s vulnerable coast. 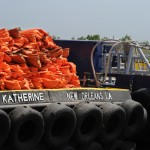 Workers prepare a ship loaded with oil barrier booms as they wait for heavy swells and wind to subside before continuing the oil clean-up operation. The wind started to strengthen and blow the 600-square-mile slick directly onto the coast, where a rich variety of wildlife were at risk in the maze of marshes that amounts to 40 percent of the US wetlands. 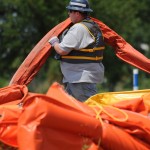 A worker from United States Environmental Services helps load oil booms onto a boat May 3, 2010 in Pass Christian, Mississippi. 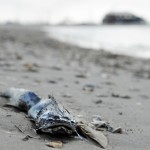 A dead fish is seen on the beach May 5, 2010 in Pass Christian, Mississippi. The BP spill was the worst environmental disaster in U.S. history. 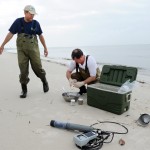 Environmental Protection Agency scientist Archie Lee collects a sample of sand as Peter Kalla also of the EPA watches May 3, 2010 on the beach in Biloxi, Mississippi. 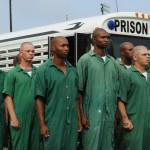 Prisoners from the Elayn Hunt Correctional Center line up as they prepare to undertake a training exercise to learn how to cleanse oil from birds affected by the oil slick from the BP Deepwater Horizon platform disaster in New Orleans Louisiana, on May 3, 2010. 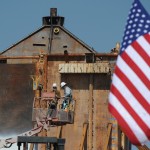 Workers put the finishing touches on the Pollution Control Dome at the Martin Terminal worksite in Port Fourchon, as BP rushed to cap the source of the oil slick from the BP Deepwater Horizon platform disaster in Louisiana, on May 4, 2010. The well wasn’t completely sealed until July.

It’s been two years since the explosion that marked the beginning of the Deepwater Horizon disaster in the Gulf of Mexico. The accident at a BP oil rig took 11 lives, and the oil spill afterwards leaked over two hundred million gallons of oil. It was the largest ocean oil spill in history.

In the slideshow above, you can see photos of the spill. And for a look at some of the lessons learned, read our earlier piece, The BP Blowout, 2 Years Later.