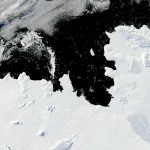 A NASA image of Pine Island Bay along West Antarctic’s Walgreen Coast. The bay deposits into the Amundsen Sea, which is absorbing a significant amount of slipped glacier ice. Although most of the surface of this ice shelf appears smooth, the presence of several ice cracks suggest that several fragments will break off and form icebergs in coming summers. 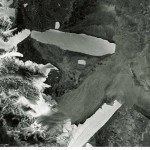 Satellite image of Iceberg B-15, the largest recorded iceberg. It once had an area of 3,100 square kilometers, which made it larger than the island of Jamaica. 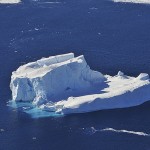 An iceberg drifting on the Amundsen Sea in West Antarctica. 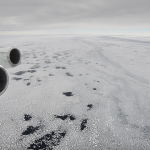 Photos taken as part of NASA’s 2009 mission to study Antarctic ice sheets, sea ice, and ice shelves. This photo was taken at an elevation of 2,000 feet above the Bellingshausen Sea in West Antarctica. 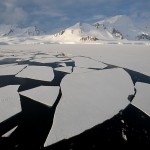 These pieces of floating ice broke off from a fjord in Marguerite Bay, on the west side of the Antarctic peninsula. 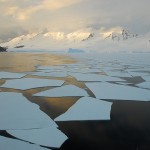 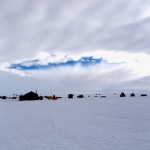 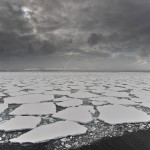 Ice sheets floating on the Grandidier Channel on the western coast of the Antarctic peninsula. 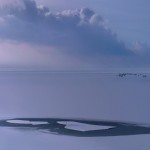 An image of a polar ice cap at Lake IJsselmeer near Amsterdam. 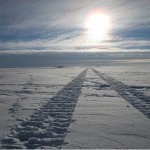 A report published in this month’s Journal of Glaciology traces the evolution of West Antarctica’s glaciers. The study, produced by the University of Texas at Austin’s Institute for Geophysics (UTIG), reveals that parts of West Antarctica’s floating ice fleet are slowly but surely breaking apart and sliding into surrounding sea waters.

The team’s conclusions reflect data taken from nearly 40 years of satellite imagery. “Anyone can examine this region in Google Earth and see a snapshot of the same satellite data we used,” Joseph MacGregor, a research scientist associate and lead author of the study, said in a release accompanying the study.

The greatest source of concern is a disintegrating ice shelf in West Antarctica’s Amundsen Sea Embayment, which saw the highest rate of ice loss from 1972 to 2011. Researchers are particularly worried about the state of the Thwaites and Pine Island Glaciers, which thinned considerable over the past ten years. Evidence of existing fractures in remaining ice shelves suggest that the pattern will continue in the future.

See for yourself in the slideshow of photos above (collected by StateImpact Texas intern Filipa Rodrigues) which contains several satellite and up-close images of West Antarctica’s glacier population. Combined, they illustrate just how majestic, vast, and vulnerable these glaciers really are.