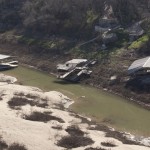 The Highland Lakes have come dangerously close to reaching historic lows during the drought. 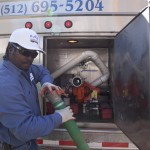 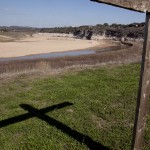 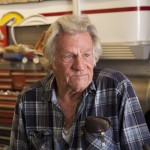 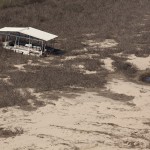 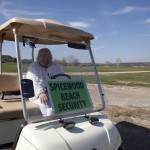 A volunteer “security guard” goes on patrol in Spicewood Beach 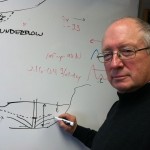 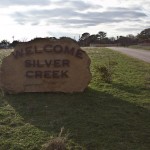 Will Silver Creek Village be the next town to run dry during the Texas drought? 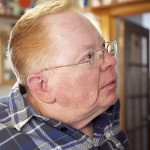 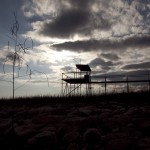 Residents in Silver Creek Village worry their wells, which depend on Lake Buchanan, will soon run dry.

After a year of record-breaking heat and drought, it began to seem inevitable that a town in Texas would run dry. What might have come as a surprise is that the town would have a name like “Spicewood Beach.”

Perched on the shores of Central Texas’ largest reservoir, the small lakeside community doesn’t seem like the kind of place where wells suddenly fail and water needs to be shipped in by tanker truck. Yet one of the persistent complaints from people in Spicewood Beach is that the Lower Colordo River Authority (LCRA), the Agency that owns the Spicewood Beach well, didn’t see the danger signs sooner.

“We didn’t get any warning!” said Robert Salinas on a recent afternoon.

It’s an example of the way the Texas drought is throwing into question the usefulness of old distinctions between surface water from Texas lakes and rivers, and groundwater from Texas wells.

If it happened at Spicewood Beach, could it happen to another Highland Lake well?

Taking a lunch break from a construction job right next to the site where the LCRA now brings water in by truck, Salinas and his friend Martin Peterson said the three weeks between the time the LCRA stopped selling Spicewood Beach’s water and when the well failed doesn’t seem like a warning at all. Peterson says the Agency should have known the well was in trouble just by casting a glance to the water level in Lake Travis right next door. He says well water and lake water are one in the same.

“They do tie in, yes [the water] bleeds through the ground into the well,” said Peterson.

While neither Peterson nor Salinas are hydrologists, they’re right about how the well worked says  Dr. Jack Sharp, a water expert with University of Texas at Austin’s Jackson School of Geosciences. “That’s a very shallow well in the alluvium up there. Interesting,” confirmed Sharp after a quick search of online records.

An alluvial well is a well that gets its water from a nearby surface water source, in this case Lake Travis. With lake levels dropping and the LCRA and the community pumping water out of the well, Sharp says it’s no surprise the Spicewood Beach system failed.

So are other wells in the region likely to go dry?

LCRA’s Water Operations Manager Ryan Rowney says he doesn’t think it’s likely in the near future. But the drought means that anything is possible.

“We’re all in uncharted territory here. We’re not really sure what’s going to happen in the ground water in our area. This is new for all of us,” Rowney told StateImpact Texas. While he says there aren’t many other alluvial wells in the Highland Lakes system, Rowney agrees that wells they are affected by dropping lake levels. When the lake level goes down, the water in the wells does, too.

“There are other parts of the state where that’s the case as well, where there’s an identified connection between a surface water source and groundwater source,” Hydrologist Barney Austin told StateImpact Texas.

Austin works with Intera, an environmental consulting group. He says groundwater from wells is traditionally tested for surface water to gauge water quality. Surface water is more likely to contain contaminants and requires more extensive treatment. But in a drought there’s another reason to test for surface water.

“It’s also important to identify when there’s a connection because obviously if your lake level is dropping then you want to know about that in your groundwater levels,” said Austin.

That’s where some say the state hasn’t been paying enough attention. The Texas Commission on Environmental Quality (TCEQ) tests groundwater wells to see if they are fed by surface water.  But those tests have been called unreliable. For example, Spicewood Beach’s well tested positive for surface water contamination once and negative another time, according to Intera’s Barney Austin. The TCEQ says it tests 10 to 15 wells a year, yet the commission concedes that there are drinking water wells in the state that have never been tested.

Some water planners, like LCRA’s Ryan Rowney, say a clearer understanding of what wells are influenced by surface water would help during the drought.

“I think at this point in time yes, because every drop of water counts,” Rowney told StateImpact Texas.

And UT’s Jack Sharp envisions a day when the entire distinction between surface water and groundwater is thrown out the window, and the state’s water supply is viewed as one interconnected whole.

Waiting, With an Eye to the Lake

In the meantime, communities near Texas reservoirs wait to see what lower water levels will mean for their wells. One of them is a place called Silver Creek, about 30 miles north of Spicewood Beach.

Silver Creek sits on what used to be the edge of Lake Buchanan. But in the drought, freshwater clam shells crunch underfoot where water once flowed. The lake is 21 feet below its average water level, and the exposed ground is littered with shells and dead fish. The town went into stage three water restrictions last October. “Our main well went dry so we had to go to our secondary well and that’s what were using now,” Nelson Brock, who handles the books for the local public water system, told StateImpact Texas.

“You know if the well did go dry we’d have to truck in water, like Spicewood Beach is doing,” Brock said.

He and the 200 people served by the water system hope it won’t come to that. The community has dug a new well. But getting it permitted and running could take five or six months. Until then, Brock says, he’ll be keeping one eye on the sky watching for rain, and one eye on the lake.