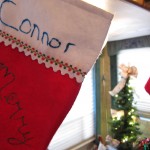 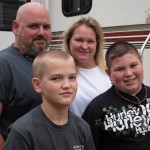 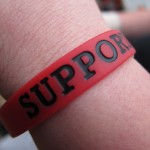 Connor wears a bracelet in support of local firefighters 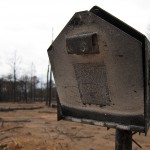 A charred, empty mailbox is all that’s left of a home in Bastrop 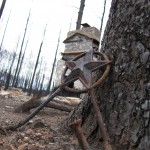 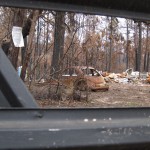 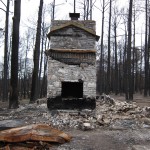 For some homes, all that remains is the chimney 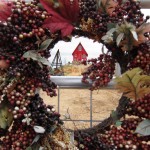 Amid the ruins of Bastrop, many new homes have already been built. 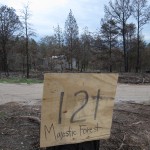 Some families have taken to making their own road signs 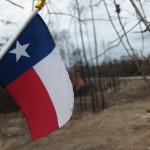 A Texas flag sits on a sign advertising a construction company.

This story was co-reported with Andy Uhler of KUT News.

On the Sunday of Labor Day weekend in Bastrop County, Kasey Tausch had just woken up from an afternoon nap. She heard her son come into their house yelling. “Mom! There’s a fire!” her son called out. She opened the front door and saw a sea of pitch black smoke. “It seemed like the fire was right there, but it was really miles away,” she remembers.

The family quickly grabbed some things and left their home. It would be gone when they came back. “We were literally driving through fire,” Kasey says. “We were just watching in amazement.”

For Kasey and her family and thousands of others in Bastrop this year, it won’t be Christmas as usual. After fires that destroyed 34,000 acres, more than 1,600 homes and claimed two lives, the holiday is going to be markedly different.

You can drive through Bastrop County today and see signs of destruction and defeat dotted with omens of hope and rebirth. Charred trees fence in flattened homesites where only a chimney remains. But at the base of those trees you can find the first signs of new life, new green leaves emerging from a burned ground. New homes are going up adjacent to the ashen remains of old ones.

For the Tausch family, this Christmas will mean a change of traditions. With their home gone, the family has settled into a one-bedroom RV in a trailer park on the edge of highway 71. When asked to tour the home, the oldest son Connor quips, “Look this way. Look that way, and that’s pretty much it.”

The two boys share a pull-out sofa in the main room. Overhead, their stockings are hung, and tucked into a small corner is a Christmas tree that is shorter than the youngest boy of twelve, Jesse. Their box of ornaments and Christmas keepsakes were lost with their home. Kasey’s husband Chuck went back after the fire and found one memento from their Christmas box: a small clay pot Connor had made at school.

The family is trying to make this Christmas “as normal as possible.” They’ll be spending the day with Kasey’s daughter in Temple. In years past they would spend Christmas at her father’s in Bastrop, but he lost his home in the wildfires. “We’re going try to keep our tradition going.”

Tears come easily when Kasey Tausch remembers what they have lost. “Losing everything you can never, ever describe,” she says. “The memorabilia stuff, stuff from kids, stuff from grandparents, that stuff you cannot replace.” Her son Jesse reaches out to comfort her, patting her shoulder.

The family is going to stay in Bastrop. “This is home,” Kasey says. They’ve found a realtor and after the holidays will start looking for a permanent place to live.

“I’m just looking for a New Year,” Kasey says. “That’s pretty much all I want for Christmas.”