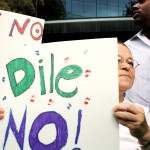 Protesters against a proposed tax break for Valero gathered outside the Texas Commission on Environmental Quality today. 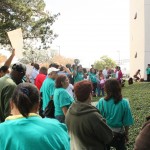 Groups arrived in large buses from Houston and surrounding areas like Pasadena. 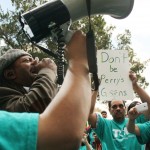 Parker, from Houston, said “Rick Perry oughta be ashamed. We need children to have a vibrant education without big interests in their pocket.” 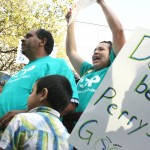 Juan and Emilia Portia, their son Miguel, and daughter Jennifer Lopez were very vocal at the protest. 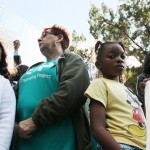 “Just Say No to Valero!” was a popular chant at the protest. 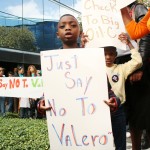 “There are too many dropouts right now,” Chad and Crystal’s mother, Leila Mikel, said. “Kids need to go to school to get a diploma. Without that piece of paper, they can’t make a living.” 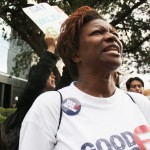 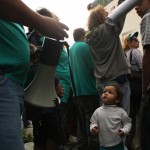 The daughter of Marta Corona, a Houston area parent, looks up at Alain Cisneros, a protest organizer 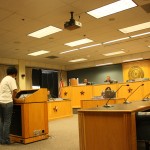 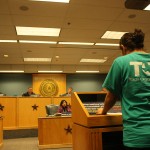 Gonzales, a 13-year old student in the Pasadena Independent School District in Houston, testified in front of the TCEQ. She spoke of her asthma, which she believes is caused by emissions from nearby refineries. 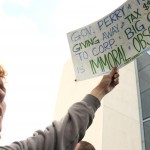 Texas Governor Rick Perry appointed the three members of the TCEQ board, who will decide on the proposed Valero tax exemption

Early Wednesday morning, a caravan of buses set out from the Houston area, headed for Austin and the headquarters of the Texas Commission on Environmental Quality. Their goal? To protest a request from Valero Energy Corp. for tax breaks for some of its oil refineries through a system that could give millions of dollars back to one of Texas’s most profitable corporations.

So far this year Valero has earned more than $2 billion. That makes the possible millions Valero wants in tax exemptions kind of seem like small potatoes.

But that, in turn, might be what has the 150 community activists and environmentalists chanting “Say ‘no’ to Valero” in front of TCEQ headquarters on Wednesday so angry.

They were protesting Valero’s request for a property tax exemption for pollution-limiting equipment installed at its industrial sites.

That would mean less money in the coffers of school districts in towns where Valero has refineries. Like the one in Pasadena, Texas, a lot of those districts have already seen severe budget cuts.

“We have shorter classes, we don’t have extra classes like we used to,” 13-year-old Destiny Gonzalez said. “The national academic league I wanted to compete in this year we no longer have, and we’re literally scrambling out of the room because when the bell rings it’s shorter than it was this year.”

Destiny spoke to TCEQ commissioners along with her mother, Pasadena PTO President Patricia Gonzalez, who said the protest wasn’t just about Valero. She’s worried about a domino effect.

“If Valero gets it, we’ve got many more oil companies that are waiting to see that happen,” Gonzalez told KUT News. “We’re already hurting as it is, but to take more away from us is so much more detrimental.”

The tax break was created to help environmentally friendly industries, but some of those protesting were environmentalists who originally backed the law’s passage.

“Proposition 2 was actually supported by environmental groups at the time, and it was to reward companies to install pollution control that really benefited communities,” said Robin Schneider, executive director of the Texas Campaign for the Environment.

While Gonzalez opposes all tax breaks for refineries that would shortchange her school district, Schneider says tax breaks for Valero would be a misuse of a well-intentioned law. She points out that the equipment that Valero wants exemptions for is already required by the Environmental Protection Agency.

“Even the staff said it was against the rules,” Schneider said. “And this has happened to me before, where the rules say very clearly what’s allowed and what’s not allowed, but the bigwigs, the commissioners, just say, ‘let’s allow it in this case.’”

What Is The Texas Commission of Environmental Quality?

Bill Day, a spokesman for Valero, doesn’t see it that way.

“It’s true that we’re required to have this equipment,” Day said. “We’re required by the EPA under their Tier 2 regulations, which call for basically the removal of sulfur from gasoline and diesel. Otherwise we never would have installed this equipment. It cost us tens of millions of dollars to put in.”

Day added the estimates that communities could lose tens of millions of dollars are exaggerated. And he said what Valero is trying to do is what you’d expect any company to do: not leave money on the table.

“It’s pretty much the same as any other property owner getting a homestead exemption, or a senior citizens exemption or an ag exemption,” Day said. “This is a process that’s allowed under state law, and we’re using the process that’s called for.”

At the TCEQ protest, the comparison of a multibillion-dollar energy company to a senior citizen looking for a tax break likely would have been a pretty hard sell.

“This is the kind of collusion between corporate elites and government officials that have caused a rebellion in this country in Wisconsin and now in the Occupy movement in some 600 communities across America,” Hightower said. “People are fed up.”

Whether that kind of message will resonate with TCEQ Commissioners is another question entirely. At the hearing Wednesday they couldn’t comment on the Valero exemption because it wasn’t on their agenda. Just when it might come up for a vote remains to be seen.