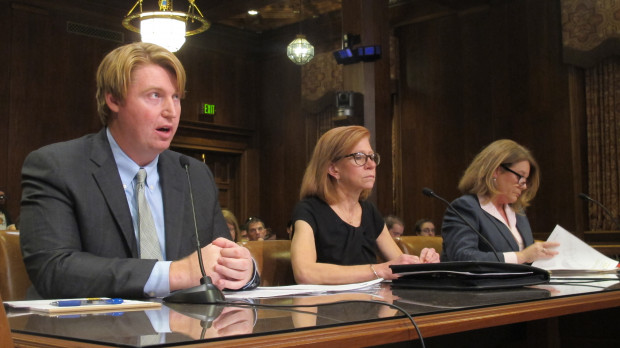 Representatives from the oil and gas industry answer questions about pipeline safety at a hearing in the state Capitol Wednesday. From left to right: Joe McGinn of Sunoco Logistics, Pam Witmer of UGI Energy Services, and Stephanie Catarino Wissman of the Associated Petroleum Industries of Pennsylvania.

State lawmakers, regulators, oil and gas industry representatives, and concerned citizens discussed ways to improve pipeline safety at a joint committee hearing Wednesday, following a building boom of new projects and several recent incidents in Pennsylvania including one work accident that killed a man and a pipeline explosion that left another man severely burned.
“When everything’s going good, we all forget about it, but infrastructure is something we have to look at constantly,” said Sen. Randy Vulakovich (R- Allegheny), who chairs the Senate Veterans Affairs and Emergency Preparedness committee.
Stephanie Catarino Wissman, head of the Associated Petroleum Industries of Pennsylvania, says the industry is constantly seeking to improve its safety record.
“When it comes to emergency and spill response, the industry’s first line of defense is preventing a spill in the first place,” she told the committees. “We are proactively funding research, including ‘smart pigs’ used to identify defects such as corrosion, dents, or cracks.”
One issue with broad support involves closing a loophole that exempts so-called Class 1 gathering lines from the PA One Call system. Class 1 lines connect gas wells with major pipelines in rural areas, and it’s estimated there are between 60,000 to 100,000 miles of them in Pennsylvania.
Last month the state legislature approved a bill reauthorizing the PA One Call safety system, but it stripped out language creating new requirements for operators to map abandoned lines and shifting enforcement powers from the Department of Labor to the Public Utility Commission (PUC).
PUC commissioner Andrew Place told lawmakers the commission supports regulating Class 1 lines, as does PA One Call President Bill Kiger, and former PUC commissioner Pam Witmer, who now works for UGI Energy Services.
“The safety of our communities, construction workers, utility crews and emergency responders would be enhanced if all pipeline operators were required to map their pipeline systems and participate in the Pennsylvania One Call system,” says Place. “One of the basic tenets of pipeline safety is to be able to accurately mark and locate pipelines in order to protect the public, workers, and the environment.” 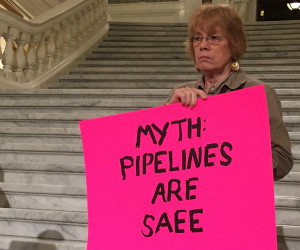 The expansion of oil and gas pipelines has caused a significant public push back. While the hearing was going on, a group of concerned citizens held a press conference in the Capitol Rotunda, urging lawmakers to hold more public hearings and take a closer look at the 184 recommendations issued this year by Governor Tom Wolf’s Pipeline Infrastructure Task Force. They also want to see rules requiring site-specific, rather than generic, evacuation plans.
Pam Bishop of Lebanon County spoke out against Sunoco Logistics, which is planning to run a natural gas liquids pipeline, known as the Mariner East 2, through 17 counties in southern Pennsylvania. The project has been delayed because the state Department of Environmental Protection found numerous problems with the company’s permit applications.
“If a company can’t write a decent permit application, how can we expect them to build safe pipelines?” she says.