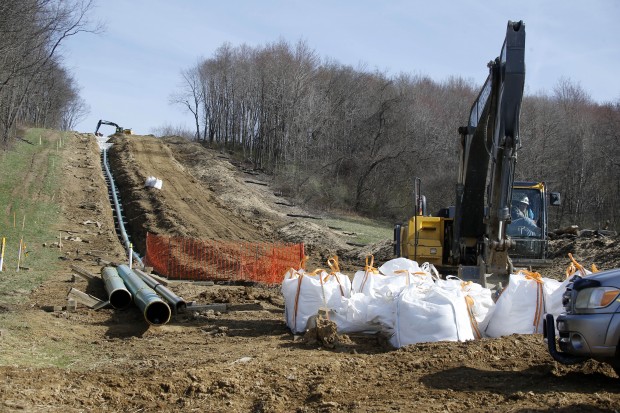 Workers construct a gas pipeline site in Harmony, Pa. Landowners are protesting the use of eminent domain, while unions are advocating for the projects.

Pennsylvania’s Pipeline Infrastructure Task Force issued its final 184 recommendations today in a 650-page document that includes 1500 public comments and is not substantially different from the draft version released in November.
The report is an attempt to implement best practices when it comes to siting, permitting, environmental protection, safety, and community engagement. But the process itself often reflected the bitter battles raging between local communities opposing new projects and gas companies trying to get their abundant supply to market.
Seven protestors were arrested at the final public meeting in January. And industry has complained that some of the recommendations are costly and redundant. While homeowners testified to bullying tactics by pipeline companies, union members made the case for good jobs. Fractivists labeled the entire process a public relations stunt.
Department of Environmental Protection Secretary John Quigley called the report “robust”and says it includes input from all the stakeholders including landowners and state officials.
“This is all about identifying best practices and how we can move forward and make sure this wave of development happening in the commonwealth is done responsibly,” he said during a webinar on the new report.
Some recommendations would require regulatory changes, while others would need new legislation. In several cases, industry would have to volunteer. Quigley says a key recommendation is for pipeline companies to engage local communities early and often.
“It is very easy for local opposition to these projects, to throw sand in the gears and slow things down,” he said. “And to these pipeline development companies, time is money.”
Quigley said some companies have done a very poor job working with communities.
“This work will be a success if it’s embraced and we continue the dialog not only in agencies and offices of government but in company board rooms.”
He says the next step is for his agency to analyze the recommendations that would fall under DEP’s purview, and figure out what could be done for each one. About half of the recommendations would come under the authority of other state or federal agencies.
About 30 percent of current shale gas wells in the state are not producing due to a lack of pipeline infrastructure. The state expects 30,0000 new miles of pipe will be laid over the next decade. There is no timeline for implementation of the report’s recommendations.
“It will take us as long as it takes,” said Quigley. “We are constrained by available manpower.”
He says there has been an $83 million disinvestment in informational technology at the agency since the start of the shale gas boom.