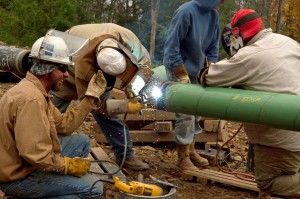 Crews weld a pipeline from a wellhead in the Loyalsock State Forest.

The Wolf Administration says Pennsylvania will be getting tens of thousands of miles of new pipelines over the next couple of decades. Recently we reported on how poorly mapped some of these pipelines are.  Many of those unmapped pipelines are also unregulated. These are rural gathering lines, or pipelines that take the gas from the wellhead to a larger transmission line, or gas processing facility.

DEP Secretary John Quigley told StateImpact that he expects the industry to add 20-25,000 miles of gathering lines. Most of those lines will be in rural areas, the so-called “class one” lines, which no state, federal or local authorities oversee.

The Pipeline Hazardous Material Safety Administration is looking at changing those rules. Linda Daugherty, a deputy associate administrator for field operations at PHMSA, told a room full of pipeline safety workers at a conference back in 2013 that the agency has been working on new rules, but the process was slow.

“What keeps me up at night? Gathering lines,” said Daugherty. “This worries me. There are a whole lot of gathering lines out there in Pennsylvania that are not regulated.”

Daugherty said the slow pace of federal regulatory change had the agency begging states to take action. But so far, Pennsylvania hasn’t been one of those states.

Although Pennsylvania’s new drilling law, ACT 13, gave the Public Utility Commission authority in regulating those pipelines, it excludes those lines in rural areas. A report to the General Assembly on gathering lines by the Corbett Administration in 2012 recommended greater oversight, but so far there’s been no action. Pennsylvania is not the only state with a burgeoning number of gathering lines. West Virginia also has a shale gas boom. And it’s also a state that has experience with rural pipeline explosions.

Thomas Miller is a volunteer firefighter who’s seen what can happen when a federally regulated major interstate pipeline explodes.

“My community, Sissonville West Virginia is the only community that experienced two major pipeline explosions in ten years,” he said.

In 2002, a 20-inch gas pipeline ruptured and caught fire in Sissonville. And in 2012, a 26-inch high pressure line exploded because of corrosion right near a major interstate, where a driver caught the explosion live on videotape. Here’s the exchange between driver and passenger:

“Dude what the f***? Dude don’t go any further. Dude that’s a forest fire. Dude people are turning around.”

“We effected one rescue for a woman who was behind her house literally behind a cinder block flower planter next to a pool,” he said. “The water in her pool was boiling.” 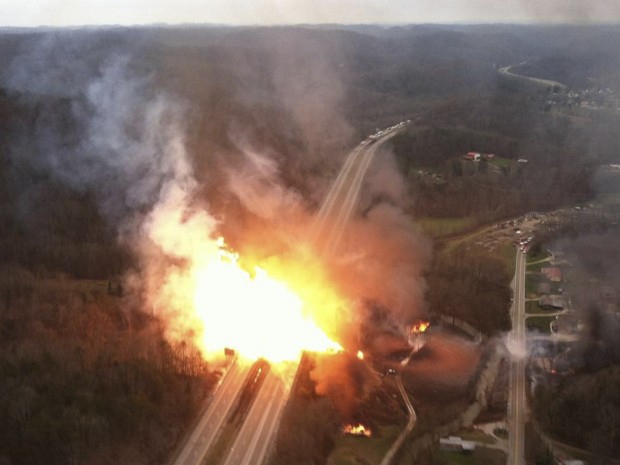 A fireball erupts across Interstate 77 from a gas pipeline explosion in Sissonville, W.Va. In the 2012 incident, the stretch of pipeline that ruptured hadnt been inspected or tested for 24 years.

What blew up in Sissonville were interstate lines in a rural area. Federal employees do inspect those lines, but that does not happen as frequently as in more populated towns and cities. The line that exploded in Sissonville in 2012 hadn’t been inspected for 24 years. And it wasn’t the only line in the area.

“One of the things that compounded the incident was there are multiple pipelines in that same right of way,” said Miller. “There was a 26-inch, a 30 and 36 inch. So when we got there the fireball was approximately 800 feet across and up to 300 feet high. You couldn’t go in. And you couldn’t tell which line was on fire. The initial report we got was that the pipeline was owned by one operator when in fact it was owned by another operator.”

So first responders had to wait for the fire to die down, hoping that nearby lines wouldn’t also explode.

“Keep in mind the first explosion blew a 73 pound chunk of rock through the air and through the roof of someone’s house.”

That incident three years ago caught the attention of PHMSA, which is crafting new rules to force pipeline operators to submit interstate transmission line maps within 5 feet of accuracy, instead of 500.

But Miller says the real threat right now are the hundreds of thousands of miles of new, unregulated gathering lines.

“You have to realize a gathering line can be ten times more dangerous than a transmission line,” he said. “Because it’s unrefined gas”

Miller is talking about how some methane at the wellhead comes up mixed with other hydrocarbons like ethane, or butane. These can be more combustible than pure methane.

“The other thing is that the standards for putting [gathering lines] in the ground really doesn’t exist,” said Miller.

That’s right. Gathering lines, all those thousands of miles of smaller pipe that get the gas from the wellhead to major transmission pipelines are not regulated in rural areas, which is where most of them are in Pennsylvania. There are no rules on how deep the line should be underground, or even if it’s buried at all. And it doesn’t even have to be marked.

“There are no safety standards applicable to those lines,” PHMSA’s Daugherty told the pipeline safety advocates.

No state or federal agency knows how many miles of lines there are, or where they are.

So what about PA One Call?

We’ve all heard or seen the Call Before You Dig slogan for that 8-1-1 number. It’s on billboards. It’s on bumper stickers. It comes on nice glossy brochures with your gas bil each month. But what if you call 8-1-1, and you get blown up anyway?

That’s exactly what happened several weeks ago in Armstrong County, which brings us to the story of a man now lying in the hospital with 70 percent of his body burned.

So how did a routine construction job lead to this?

It was all due to an accident that didn’t have to happen.

Authorities are still investigating. But one thing we do know, the contractor he worked for did call before he dug. PA One Call director Bill Kiger says the organization gave them the all clear to dig.

“If you call and make a notification thinking that everybody is covered, you expect that to be the case, and not to be in the hospital at the end of the day,” Kiger said.

Turns out the worker was building a new gas pipeline when his bulldozer hit another unmarked gas pipeline and it blew up. Pictures show the charred bulldozer sitting next to a crater in a rural area of Armstrong County. The line that the worker hit, a 12-inch line, was not mapped. It’s unclear whether the line was a gathering line. But in rural areas, gathering line operators are not required to register with PA One Call. 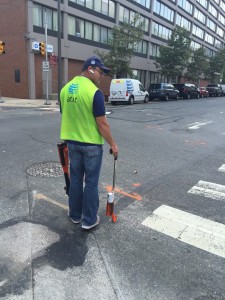 A worker marks utility lines as part of the PA One Call program in downtown Philadelphia. In rural areas, companies that operate natural gas gathering lines are not required to participate in the program.

Kevin Moody is general counsel for the Pennsylvania Independent Oil and Gas Association:

‘The accidents that have caused the most property damage and loss of life have not been on gathering lines. But they’ve been on regulated utility lines. There’s been no demonstration of safety risk on these gathering lines especially ones in rural areas, because these are small diameter, low pressure. Even if they’re hit, they’re not going to cause damage.”

Moody says the small One Call program takes a lot of expensive man-hours.

“A lot of our members are mom and pop operations and they don’t have the computer savvy that a lot of larger companies have,” he said.

Here’s why it’s hard to know who’s right. We don’t have an accurate record of these pipeline incidents. Unless someone dies, or gets really hurt, like the worker in Armstrong County, the company doesn’t have to report these pipeline hits in rural areas. So the number of incidents on file could be inaccurate. Officially gas line hits are trending down. But who knows? They could be going up.

The larger, major Marcellus Shale drillers in Pennsylvania have agreed to voluntarily participate in PA One Call, even when they’re not required to do so.

But the smaller company that owned the unmarked line that blew up several weeks ago in Armstrong County was not registered with PA One Call in that area.

Some local communities have decided to map their own lines. Bradford County is one of them. Robert Barnes is the county’s emergency manager. 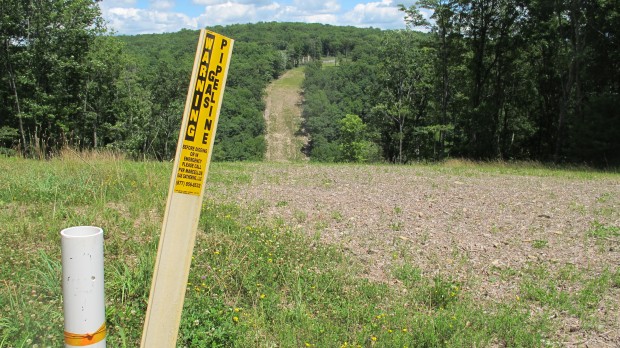 “It’s a matter of necessity,” Barnes said. “The gas industry since ’07, when the ramp up was evident, we had to share info because of the amount of activity that was going on here.”

As a result, Bradford County officials know the exact location of every pipeline in their domain, from the smallest to the largest. The 911 dispatchers have this information at their fingertips. And contractors can check the map online if they need to. It’s an amazing map, and publicly accessible. It includes the 800 miles of unregulated gathering lines scattered throughout the county.

When I asked Scott Molnar, Bradford County’s map maker, how long it would take for his county to map all the new pipelines since the start of the shale gas boom if they were to start from scratch, he said it would take one person a full year. Molnar says he started with earth disturbance notifications that pipeline companies have to file with the county commissioners.

“Our first stack was a couple of inches high,” he said.

It’s unclear what reforms state and federal authorities will implement in the age of a pipeline building boom. But in the meantime, Sissonville West Virginia’s Thomas Miller has this advice for local communities:

“The time you should be meeting the pipeline operator is not when you have an 800 foot flame column. That is bad. That’s a bad situation.”

Miller would say follow the example of Bradford County, get to know the pipeline operators and rely on them for good information.