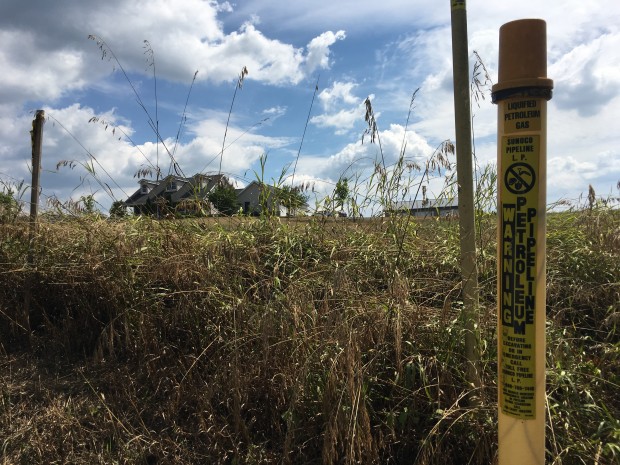 A sign marks the Mariner 1 gas liquids pipeline in Cumberland County. Sunoco is planning to build another line, the Mariner 2, alongside it.

State environmental regulators held another public hearing Tuesday night to get public feedback on the proposed Mariner 2 natural gas liquids pipeline that would span 17 counties and cross 350 miles of southern Pennsylvania.
About 110 people turned out to the Farm Show Complex in Harrisburg. A conference room was filled with representatives from labor unions, extolling the job benefits of project, and environmental opponents criticizing the proposal. Compared to other recent public gatherings about pipelines, the evening was fairly tranquil, with members of each camp politely applauding for their spokespeople.
“We’ve seen the public support and listened to the concerns,” says Jeff Shields, a spokesman for Sunoco Logistics, the company behind the proposal. “That’s what we’ll continue to do.”
DEP is currently reviewing Sunoco’s permit applications to expand its Mariner East system, which includes an existing gas liquids pipeline, known as the Mariner 1. The new pipeline, called the Mariner 2, would transport natural gas liquids (NGLs) from eastern Ohio and western Pennsylvania’s Marcellus and Utica shales to the company’s Marcus Hook terminal near Philadelphia, and run largely parallel to the existing line.
DEP’s role is limited; it’s reviewing permits for places where the pipeline crosses waterways. That didn’t stop many speakers at the hearing from delving into other topics. Stephane Catarino Wissman, who heads the state division of the American Petroleum Institute, a trade group representing oil and gas companies, discussed the broader economic benefits of the pipeline.
“NGLs can supply heat during the winter, are used to power homes and businesses and most importantly provide a fuel source for Pennsylvania’s manufacturing industry,” she told the DEP.
Although the most of these NGLs are currently being exported to Europe, Sunoco says it wants to develop the regional market. Elise Gerhart, who has publicly tangled with the company after it cut trees on her family’s property last spring, addressed the union workers directly.
“I’m a Pennsylvanian with a job too,” said Gerhart. “We’re not here to fight you about jobs.”
Other opponents urged DEP to hold more public hearings across the pipeline route and extend the public comment period beyond the August 24th deadline.
The department will hold its final hearing Thursday at the Westmoreland County Community College’s Founder’s Hall Amphitheatre in Youngwood from 6:30 to 9:30pm.