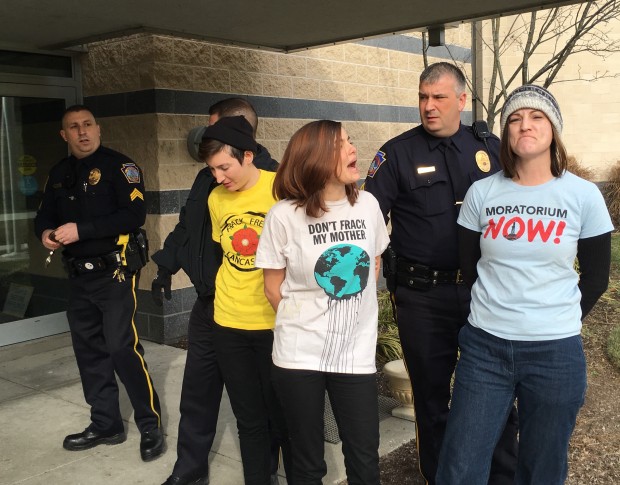 Seven people were arrested for disorderly conduct after they disrupted the final meeting of Governor Tom Wolf’s Pipeline Infrastructure Task Force in Harrisburg Wednesday.
The protesters shouted as they were escorted out of the meeting by Capitol Police:


The task force was convened by state Department of Environmental Protection Secretary John Quigley last year. It’s made up of representatives from industry, government, academia and environmental groups. Over the past few months, they’ve put together a draft report with 184 separate recommendations for Wolf on how to handle Pennsylvania’s ongoing pipeline building boom.
The public meetings have been contentious at times, with emotional pleas from landowners who accused major oil and gas companies of bullying their way onto their properties through the use of eminent domain. Representatives from organized labor and business groups have also spoken out in favor of the projects, siting the jobs they bring to skilled workers, such as welders. However most of the public comments have been negative.
Anti-fracking groups have accused the entire effort as being a public relations exercise, which Quigley disputes.
“This process has helped us elevate our practice,” he says. “It’s my hope the industry hears the messages from the report, public comments, and folks that came here to this meeting. There were some powerful messages that we all need to pay attention to.”
David Spigelmyer who heads the state’s main gas industry trade group, the Marcellus Shale Coalition, sent a letter to Quigley last month questioning the need for many of the recommendations in the report.
“Imposing additional costly, and in many cases duplicative requirements runs counter to the stated purpose of the task force,” Spigelmyer wrote.
State Senator Andy Dinniman (D- Chester) piled on at Wednesday’s meeting and criticized the group for failing to engage lawmakers. He told them many of his fellow legislators are unaware of the task force’s report.
“If the task force is going to have some meaning there is going to have to be some effort to share it with the legislature,” he said. “Otherwise like all task force reports, it gets put on a shelf somewhere.”
The final report from the group will be delivered to Wolf in early February.

DEP plans more monitoring to clamp down on methane leaks