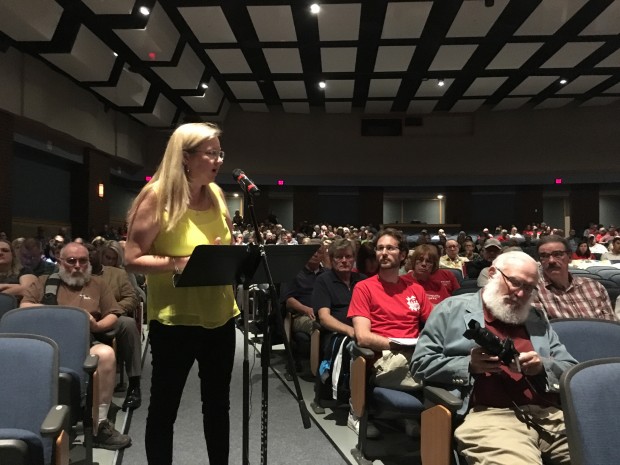 "This is a redistribution of my wealth directly into the pockets of Williams' executives and shareholders," says Kim Kann who lives along a proposed pipeline route."That is as un-American as it gets."

Federal regulators got an earful at an angry public meeting about a proposed natural gas pipeline in Lancaster County, which ended with the police showing up as protesters disrupted the proceeding.
About 350 people attended the meeting Monday night to give comments on the Atlantic Sunrise pipeline project to the Federal Energy Regulatory Commission (FERC). Most of them were against the project.
The crowd repeatedly chanted, “Lancaster decides, not FERC! And Lancaster says ‘No!’”
After hours of public comments, pipeline opponents walked up on stage around 10:40pm and began singing, “Digging us a hole”— a song used to protest the Keystone XL Pipeline. No one was arrested.
“We wanted to try to control the message and let FERC know we will decide,” says pipeline opponent Tim Spiese.
The pipeline is being developed by Tulsa Oklahoma-based Williams Partners and has been in the works for over two years. It cleared a major hurdle from FERC last month, paving the way for the $3 billion expansion of the Transco pipeline system—which includes 10,000 miles of lines that move gas to utilities and power plants.
If approved, it would cut through portions of 10 central Pennsylvania counties (Columbia, Lancaster, Lebanon, Luzerne, Northumberland, Schuylkill, Susquehanna, Wyoming, Clinton and Lycoming).
The most vocal opposition has come from Lancaster, where people have been repeatedly arrested for civil disobedience. Opponents even stitched together a massive anti-pipeline quilt earlier this year. One man wore a section of the quilt draped around himself like a cape while voicing his displeasure with the project Monday night.
In May, FERC and the U.S. Army Corps of Engineers issued a draft environmental impact statement (EIS) concluding the environmental impact would not be significant.
From the EIS:

The FERC staff concludes that approval of the project would result in some adverse environmental impacts; however, most of these impacts would be reduced to less-than-significant levels with the implementation of Transco’s proposed mitigation and the additional measures recommended in the draft EIS.

This did not sit well with many Lancaster County residents who voiced concerns about lowered property values, environmental damage, and safety.
“Get out of your concrete and glass bunker in Washington and come see what is ‘significant’ to us,” Spiese told the regulators. “The people of Lancaster intend to hold each of you here today accountable for your negligence and failings in this process.”
Supporters of the project also spoke up, telling FERC the project will help insure a reliable grid, as gas becomes increasingly significant source of electric power generation.
“The new power plants we’re building in this country are wind, gas, and solar. Wind and solar are inherently intermittent– they need something to back them up,” says Kevin Sunday, a spokesman for the Pennsylvania Chamber of Commerce. “We’re seeing nuclear and coal plants shut down. We need gas plants to provide the base-load generation. The only way to do that and keep the lights on if we build projects like Atlantic Sunrise.”
FERC is expected to make a final decision on the project in early 2017. The commission is holding three more public meetings in Pennsylvania this week. All meetings begin at 7pm:

This post has been updated with information about the disruption of the meeting.