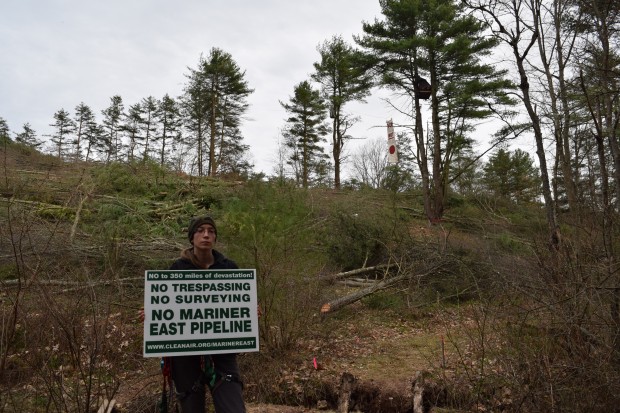 Elise Gerhart stands with a protest sign after Sunoco crews cleared her family land of trees. Gerhart sat in a white pine tree while the tree-clearing happened around her. A continuing court case could not stop the tree cutting.

Pipelines criss-cross the countryside and lie scattered beneath the urban landscape. They bring us water, natural gas, gasoline. What if someone came knocking on your door wanting to put one through your front yard? That’s exactly what is happening across Pennsylvania right now, as pipeline companies use eminent domain to secure land from uncooperative landowners.

Our story begins with 29-year-old Elise Gerhart, sitting up in a white pine tree, on a platform she built about 40 feet high on her parents land in Huntingdon County. Chain saws roared around her.
“This is my home, you know, I grew up here,” Gerhart shouts down from her perch. My parents owned this place five years before I was born.”
Down below police officers were guarding work crews and arresting her mother on her own land.
This is eminent domain in action. The idea that the government can take land for the public good. That’s why we, the public, get to enjoy national parks, and drive on highways. One of the earliest enforcement of eminent domain by the federal government was used to expand the Gettysburg National Military Park.
There are times when companies also get the authority to take away private land. And this comes as a surprise to many people. It certainly came as a shock to Elise Gerhart.
“It boggles my mind because it goes against everything you’re taught growing up in America and the American Dream is to own property.” Gerhart stood with her mother by a stream surrounded by woods on their land days before she decided to take to the tree. “And as it turns out these companies can just come and take it away from you.”


When pipeline companies won’t take no for an answer

Sunoco wants three acres of the Gerhart’s 27-acre property in Huntingdon County to expand a pipeline that will carry natural gas flowing out of the Marcellus Shale. The Mariner East 2 will transport natural gas liquids from eastern Ohio and western Pennsylvania’s Marcellus and Utica Shales 350 miles across Pennsylvania to the company’s terminal near Philadelphia.
At first, Sunoco said its plan was to solely to export the gas to Scotland so it can be turned into plastics, which has Elise Gerhart and some of her neighbors asking about the public good in chopping down trees to make plastics overseas.
“The world doesn’t need more plastics, it needs more forests,” she said.
When Sunoco officials were confronted with fierce opposition across the state, their story changed. Now the company says the pipe will benefit rural Pennsylvanians. Their new plan is to unload some of the fuel along the way to help heat homes in Berks and Lebanon counties. A company spokesman also says some of the liquids, which include propane, could be shipped domestically from their terminal in Delaware County.
The Gerharts say Sunoco initially offered $14,000 for a 3 acre easement on their property, and as the company was rebuffed, the offer grew to $100,000. Still, the Gerharts turned it down, saying their land wasn’t for sale.
“Sunoco is a private for-profit corporation,” said Elise Gerhart. “They’re not PennDOT widening the road that we then drive on. There’s just no comparison here between this and that.”
Sunoco spokesman Jeff Shields says the company uses the power of eminent domain as a last resort, only when negotiations with individual landowners break down. 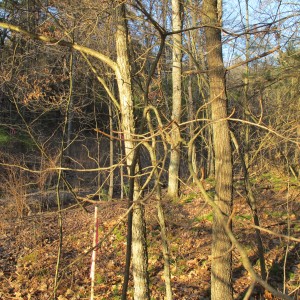 A forested area before Sunoco crews cut trees on the Gerhart land. A surveyors flag is in the foreground.

And some landowners are happy with the money Sunoco paid them for their land and trees. But dozens of families, including the Gerharts, are now in county level courts of common pleas across the state, either unhappy with the money Sunoco offered, or battling the use of eminent domain for something they don’t see serving the public good.
“What do private property rights mean then?” she said. “Because once a judge, a county level judge, makes that ruling in favor of the company over the landowners, they’ve sold out their entire county. That means that Sunoco could go to our neighbors, or to our neighbors neighbors, or to the judge’s house and take their land through eminent domain. Or another pipeline company could do that.”
And it’s not just Sunoco, pipeline companies are taking people to court all across the state.
“It’s totally insane what’s happening,” Gerhart said. “Nothing is sacred anymore, no conservation area, no business, no school. They’ll put these pipelines anywhere they want.”
Ellen Gerhart, Elise’s mother, says the family bought the land in 1982 with the intention of preserving it. The Gerharts joined a state program that gave them tax breaks for not developing the land.
“You can get up in the morning and look out your window and you’ve got deer in the front yard, you’ve got turkeys with their chicks, it’s just a nice peaceful quiet area.”


The golden certificate from 1930

Sunoco’s power to use eminent domain in this case goes all the way back to a 1930 decision made by the Pennsylvania Public Service Commission, a precursor to the state Public Utility Commission, which granted the Susquehanna Pipe Line Company a “Certificate of Public Convenience,” meaning it would be considered a public utility. That certificate granted the company permission to build a pipeline to transport gasoline from Philadelphia area refineries to western counties.
It’s unclear if the Susquehanna Pipe Line Company ever used eminent domain to construct the original line. But the 8-inch pipeline still exists, and Sunoco Logistics now owns the line, which it retrofitted to ship natural gas liquids from the Marcellus Shale to Southeastern Pennsylvania. The company reversed the flow on that 8-inch line, renamed it the Mariner East pipeline, and shipments of the natural gas liquid ethane, began leaving the Port of Philadelphia for Scotland in March. Sunoco’s expanded $2.5 billion Mariner East 2 includes two 24-inch diameter lines that will carry ethane, butane and propane through 2,700 properties in Ohio and Pennsylvania. To build the Mariner East 2, the company needs a lot more land.
Sunoco argues that the original certificate, combined with recent certificates of public convenience it received from the Public Utility Commission to expand the Mariner East 1 pipeline in Washington County, give it the power of eminent domain. The Public Utility Commission, in a brief to the courts, defended its decision to grant the certificate of public convenience, but takes no position on whether or not Sunoco’s use of eminent domain in this case is legitimate.
For the most part, the company’s legal arguments have worked. Courts in western and central Pennsylvania have been consistently ruling in Sunoco’s favor and against landowners. But courts in both York and Philadelphia counties have questioned that 86-year-old decision, raising issues as to whether the company is engaged in interstate commerce, and whether it should enjoy status as a public utility.
Some eminent domain attorneys say the issue may not be resolved until it reaches the state Supreme Court. If so, it will be the job of court to decide just how broad the power of eminent domain is in the state, and how the public good is defined. 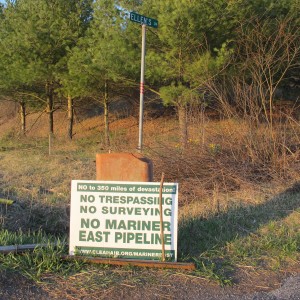 A sign opposing the Mariner East 2 pipeline at the edge of the Gerhart's property.

Eminent domain attorney Rich Raiders represents about a dozen landowners who have cases with Sunoco, including the Gerharts. Raiders boils it down to this:
“The issue for the landowners is that this is David versus Goliath and unfortunately as the landowner, you are playing the role of David,” said Raiders. “Oh and by the way, Goliath is holding the slingshot.”
In fact, Sunoco’s eminent domain authority has allowed it to chop down trees even as the court battles continue. In the Gerhart case, a Huntingdon County judge threatened protestors with six months in jail if they impeded the work of the tree-clearing crews. And while Gerhart was able to save that one white pine tree she sat in, Sunoco crews did cut down three acres of surrounding trees.
“We tried everything else,” said Elise Gerhart from her perch in the tree. “We tried to make petitions and write letters and make phone calls and do research and go to meetings and fight it in the court system and everything has failed us.”
Now Gerhart is also worried about the safety of the pipeline that would run beneath her parents land.
Gerhart’s fears have grown since last month, when a natural gas interstate transmission line exploded in rural western Pennsylvania, leaving one man with burns on 75 percent of his body, and scorching 40 acres of farm land.
“It seems crazy right? That we have to do this,” she said. “That we’ve been forced to do this because the government isn’t protecting us.”
The company plans to begin construction on the pipeline this summer.
Reid Frazier contributed to this report.
Correction: An earlier version of this story referenced a landmark U.S. Supreme Court case that authorized use of eminent domain to create the Gettysburg National Military Park. Eminent domain was used to expand and preserve parts of the park, the land used to create the original park was not part of an eminent domain taking.