Rift grows between Wolf and environmentalists 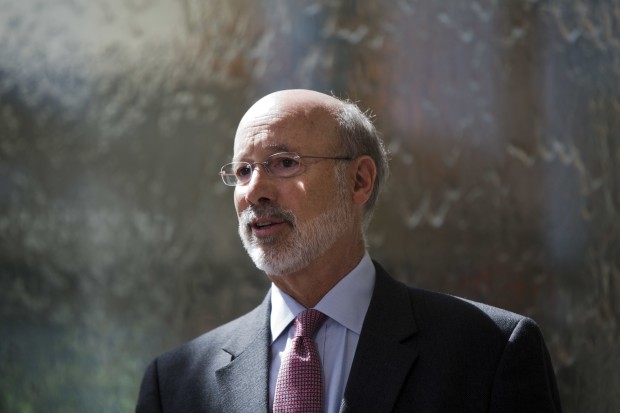 “I don’t know why he’s caving on the environment,” Rep. Greg Vitali (D- Delaware) says of Governor Tom Wolf. “But he clearly is caving.”

As Pennsylvania’s July 1 budget deadline looms, Governor Tom Wolf is finding common ground with the Republican-led legislature on bills affecting climate change policy and regulations for the oil and gas industry.
But it’s leading to a growing rift between his administration and environmentalists.

“He’s caving on the environment”
“The environment has historically been the low man on the totem pole in budget negotiations,”says Rep. Greg Vitali (D- Delaware).  “It’s frequently been traded off by the Democrats to get other things.”
Last week Vitali called a press conference to blast Wolf for what he views as a failure to prioritize the environment. Vitali is particularly upset the governor is on board with a Republican-led effort to kill tougher regulations for the conventional oil and gas industry.
“I don’t know why he’s caving on the environment, but he clearly is caving,” Vitali says.
The conventional industry drills shallower wells and get far less attention than the deeper, newer operations in the Marcellus Shale. But the number of producing conventional wells stands at more than 74,000 statewide and dwarfs the number of Marcellus wells. In 2014 the conventional industry was cited for 1,449 environmental violations.
Joanne Kilgour heads the state chapter of the Sierra Club and points out the proposed Chapter 78 regulations were almost complete. They’ve been in the works for five years, as part of a process that began under Wolf’s predecessor, Republican Governor Tom Corbett. In April the regulations were approved by a state commission, which found they were in the public interest.
“It would be unacceptable and offensive for any lawmaker to agree to a compromise that would abrogate any portion of this rulemaking,” says Kilgour.
Likewise, Rep. Steve McCarter (D-Montgomery County) opposes efforts to torpedo them at the eleventh hour.
“Those regulations were long in the making,” he says. “Yet in the span of less than hour the House Environmental Resources and Energy Committee voted to set them aside.”
Bureaucrats “run wild”
Republicans see things differently. Rep. John Maher (R-Allegheny) chairs the committee and says the measure is an effort to rein in bureaucrats who have “run wild” at the state Department of Environmental Protection and overstepped their authority. The rules for the conventional industry are too similar to those designed for the Marcellus Shale drillers, he says. So, they need to go.
“The governor’s on board with this bill as it stands right now,” Maher told the House Tuesday. “This is one of those happy moments when we actually see the legislature and the governor sitting down and sorting things out.”
But when asked to explain his position at a press conference Monday, Wolf seemed confused.
“I can’t explain that,” said Wolf. “I do not support doing away with regulations.”
His spokesman, Jeff Sheridan, later stepped in to clarify. The entire regulatory package had been at risk of being rejected by the legislature. A bi-partisan agreement allows the Marcellus Shale regulations to go forward, but the conventional regulations will be tossed out. Sheridan says administration is hopeful they can work with the legislature to draft new ones soon.
Vitali isn’t impressed.
“This is the game the drillers play. Delay, delay, delay,” he says. “That’s what they’re doing on climate change too.”
He’s referring to SB 1195, which passed the House and Senate Wednesday. It would give legislators a bigger role in crafting Pennsylvania’s federally-required Clean Power Plan, which aims to curb greenhouse gas emissions from power plants. Climate activists packed the Capitol this week to lobby against it, arguing it’s a delay tactic designed to undermine the whole process.
“Many of the polluter-backed legislators are launching this massive attack,” says Adam Garber of the advocacy group, PennEnvironment. “We’re definitely concerned about what happens every year during the budget process. We’re going to be watching closely.”
“Punched in the gut”
But Republicans say these measures are critical to protecting the state’s economy. Rep. Jeff Pyle (R-Armstrong) is seeing a lot of miners in his district lose their jobs as coal faces tougher regulations and competition from cheaper, natural gas.
Across the country 33,908 coal jobs have been lost since 2011.
“Our natural resources industry is getting punched in the gut,” says Pyle.
Pyle also serves on the House Environmental Resource and Energy Committee, and rejects the mainstream science on climate change.
“Tell me how we’re gonna control the sun?” he asks. “And then we can control the climate and weather.”
For his part, Maher does think Pennsylvania should develop its own Clean Power Plan, and says SB 1195 is not a delay tactic. Right now the Clean Power Plan is tied up in federal court. Maher says this measure updates previously established timetables set in state law so Pennsylvania can comply. However, he also doubts mainstream climate science.
“The idea of settled science is a notion that was discredited in about the 15th century,” says Maher.
Actually climate science is pretty well settled. The vast majority of scientists conclude it is real, a serious threat, and caused by a sharp rise in man-made greenhouse gas emissions.
What is not settled yet is the state budget. And as deals get made, will Wolf sign off on this too? His spokesman says he will review it and is committed to addressing climate change.