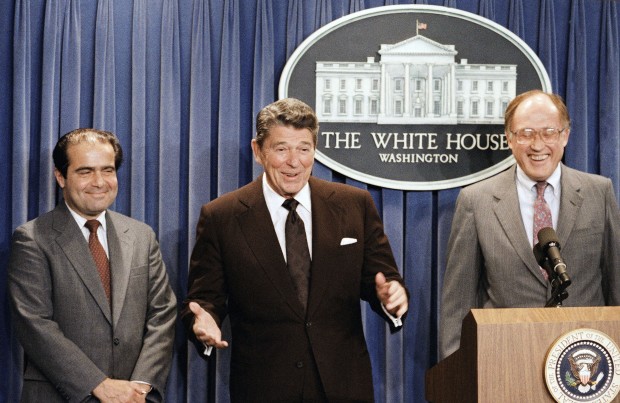 In this June 17, 1986 file photo, President Ronald Reagan speaks at a news briefing at the White House in Washington, where he announced the nomination of Antonin Scalia, left, to the Supreme Court as a result of Chief Justice Warren E. Burger's resignation. William Rehnquist is at right. On Saturday, Feb. 13, 2016, the U.S. Marshals Service confirmed that Justice Scalia has died at the age of 79.

The sudden and unexpected death of Supreme Court Justice Antonin Scalia gives environmentalists hope that Obama’s landmark effort to reduce greenhouse gas emissions has a fighting chance in the courts.
“It changes my opinion dramatically,” said Ann Carlson, Shirley Shapiro Professor of Environmental Law at UCLA.
Last week, Scalia, along with four fellow conservatives on the Supreme Court shocked legal experts like Carlson, as well as environmentalists and the coal industry, by ordering a temporary stay to the Clean Power Plan.  The court said legal challenges to Obama’s climate change regulations had to get settled first. Twenty-seven states and the coal industry sued the EPA over the new rules.
The unprecedented 5-4 decision signaled to everyone, for the first time, that the plan may not hold up to scrutiny by the Supreme court.
But Scalia’s death now splits the court evenly between liberals and conservatives, which could end up tying the court’s hands. Any 4-4 decision by the Supreme Court means the lower court decision would prevail.
Ann Carlson, an environmental law professor at UCLA, says the fate of the Clean Power Plan may now be in the hands of the liberal-leaning D.C. Circuit Court.
“That means that the odds, to me, of the Clean Power Plan being up held go from maybe under 25 percent to over 75 percent,” said Carlson.
But she says a D.C. circuit decision in favor of the Clean Power Plan is not a slam-dunk. And those odds could change depending on whether Obama gets to appoint a new justice, or on who wins the White House.
In the meantime, Governor Tom Wolf says the state will continue its planning process aimed at implementing the Clean Power Plan, over the objections of state Republicans.